“We compete on industrialising the clean charcoal process”

The other day, there was a fistfight on the factory floor. More worryingly, an employee’s child did not turn up at school. This is directly the responsibility of Sustainable Green Fuel Enterprise (SGFE). The social enterprise was created in Cambodia in 2008 to alleviate poverty, starting with its 35 employees. They are credited with coming up with the method of “greener charcoal”, using coconut husks and organic waste. Hired via the education NGO PSE (Pour un Sourire d’Enfant), the situation is “delicate”, says Carlo Figa Talamanca, chief executive. To curb high school dropout rates, and to stop young people from leaving school early, often to start working at the dumpsite as their parents did or in illegal activities, SGFE employs their parents, providing bank accounts and part of their monthly salary in advance. 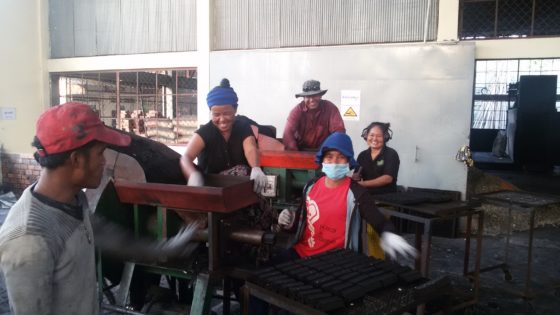 The condition is that they educate their children; at the end of 2015, 21 children were in school. “Many are illiterate, and have never had proper jobs,” explains Talamanca. A 2015 report by SGFE suggested every second person in Cambodia under the age of 24 did not have a primary school education. “We provide a salary, with health insurance, holidays and annual leave. It’s a big motivation for me and my team, but it’s pretty hard. One child was sold by her mother, but we managed to find her and get her back into school.” 3 of the team members have been there since the beginning; vast majority are production workers. As former waste pickers, these locals from the suburbs of Phnom Penh (some of whom have moved from more rural areas to find work), are part of a sustainable solution, in reusing waste and char residue.

SGFE started life as a project run between two NGOs: GERES (Group for Environment, Renewable Energy and Solidarity), and the aforementioned PSE (whose name translates to ‘for the smile of a child’). Talamanca came on board as a consultant in 2010; the small factory offering an alternative to the more polluting, traditional charcoal was not financially sustainable. He invested his own money as an emergency measure, and took over. The plan was to restart the social business, maintaining its original goals – encouraging a local economy with social and environmental impact – but this time, from a more profitable angle. 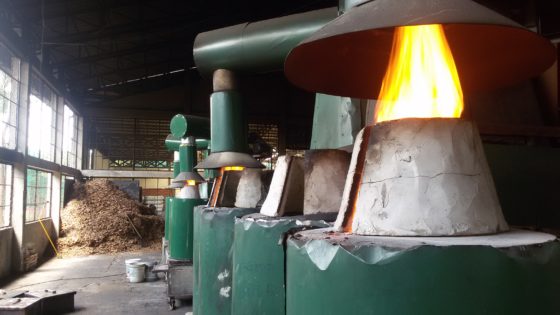 In 2014, SGFE findings showed that many customers used charbriquettes for seven hours a day, implying a hugely improved health benefit of the smoke-filled kitchens of before. The majority of the customers are Khmer restaurants, followed by street vendors and Japanese and Korean restaurants. Even then, a charbriquette may not be powerful enough to fire up a pot of rice, and so Liquified Petroleum Gas or traditional charcoal is still used, according to a 2015 report released by SGFE.

It’s also not easy to convince people in households of the benefits of using charbriquettes as a fuel alternative. Over 90% of Cambodians still cook with biomass, wood and charcoal. SGFE specialises in two types of briquettes made purely from biomass – one model, ‘diamond’ is made entirely from empty coconut shells. The other model is made mainly from recycled wood charcoal residues, with around 5% of coconut shell char. Talamanca remembers a customer simply not believing in the premise of a smoke-free kitchen. “He told me it was probably more healthy for me, as a white man, but that he had been used to the smoke in his house since he was a child; he thought he was immune to it.”

The production and management of the briquettes came about largely thanks to the work of engineering interns and trainees who came to Cambodia. Some have written their graduation theses on the enterprise. “Unluckily, there is a lack of available talent here in Cambodia, for the moment,” says Talamanca. “But we improvise. It’s learning by doing.” SGFE has come up with a unique in-house drying technology for the raw materials, after they are mixed through with tapioca starch, and compressed with water in a machine. This takes less than 24 hours; usually, the crushed materials take 2 – 3 days to dry in the sun.

External funding helped the enterprise grow from selling 4 tonnes per month, to over 100 tonnes a month, in 5 years – impacting more over 2000 households. Two grants from the Global Alliance on Clean Cookstoves and the Waterloo Foundation allowed for scale. As production output increased, the team doubled in size. Prices were raised in response, as the demand was so high. With new private investment in the bag, a bigger factory is planned, which could produce 500 tonnes per month.

The key to the enterprise’s growth, says Talamanca, who has also worked in parts of Africa as a UNHCR consultant, is the economy of scale. It is for this reason that working solely in rural areas, where there is a lot of reliance on firewood, is not a viable business model; although 80% of Cambodians live in rural areas. “Selling char-briquettes in rural areas would not be competitive, where those prices are low. In urban areas, they are higher, as they are transported to the city. We don’t have costs since we’re in the Cambodian capital.” With home delivery, the briquettes are popular with customers.

As Talamanca explains, the process of making “traditional charcoal” – typically by a family network who will chop trees in the forests and bury them in mid kilns in the ground, to then sell at a low cost – is too hard to compete with. “We would have to purchase raw materials, maintain machinery, pay for electricity, not to mention assign salaries or run a factory. So, we compete on industrialising the process as much as we can.” Thus, as energy providers, SGFE’s focus is on urban areas, where there is a higher demand for charcoal, and where prices are higher. Around 10% of the company’s eco-cooking fuel output goes to four provinces: Siem Reap, Takeo, Svay Reang and Prey Veng.

By producing charbriquettes and saving wood, SGFE is ensuring that less charcoal comes from illegal logging. Cambodia is at extreme risk of deforestation, losing 20% of its woodland in recent years. Since the C02 emissions are no longer being absorbed into the forests, the risk of climate change increases. SGFE’s carbon footprint helps make this very case; it has certified its footprint, and an official UNFCCC calculation has shown that for every tonne of char-briquettes the enterprise makes, 16.5 tonnes of C02 emissions, and ten trees are saved. The enterprise saves around 20,000 tonnes annually. The company was awarded the Ashden Award for Avoided Deforestation 2014.

The company made a profit in 2016, which was partly due to Talamanca’s lobbying of the government for a 10% tax exemption for three years. “I found the government very collaborative,” says Talamanca. “They are also in discussions with the NGO GERES to halt sustainable charcoal production sourced in forests, by taxing traditional charcoal production. One thing is clear; you cannot stop the demand, and you cannot stop the supply. The only way is to try to raise charcoal prices, make sustainable solutions more competitive, and fine the transporters or retailers.”

The plan going ahead is to build a franchise model with local entrepreneurs in other countries; Talamanca has visited Uganda, Ghana and the Philippines. ” I don’t personally know all of the other countries and I would not be able to the business myself; and to start and do it all over again! I went through that once already in Cambodia…” he laughs. “The idea is to partner with and do a technology transfer in other countries, of production but also production processes, supply chain management, marketing and so on. Even reputable projects with private investments can seem quite primitive, compared to what we are doing, so we’d like to transform the way of doing the business, customised to a local environment.” For Talamanca, it is not about scale or the production technology itself – “it’s really the entire system”. The future is sustainable, promising efficient large-scale production, the ‘economy of scale’, and a stabilising environment for employees and the environment.

Permanent link to this article: https://e4sv.org/carlo-figa-talamanca-sustainable-green-fuel-enterprise/