Energy for development – the concept

Two critically important and linked challenges face the global community in the 21st century: the persistence of widespread energy poverty and the resulting loss of economic opportunity; and intensifying human-driven climate disruption. These crises are inexorably linked through the energy technology systems that have so far provided the vast majority of our energy: fossil fuels. Both the equity and energy service crisis and the climate crisis have become increasingly serious over past decades, even though we have seen with greater clarity the individual and social benefits that energy technology systems have brought to humanity.

The correlation between access to electricity and a wide range of social goods is overwhelming. Access to improved energy services alone does not, however, provide a surefire pathway to economic opportunity and an improved quality of life. In Figure 1 we show the correlation between electricity access across nations and a variety of quality-of-life indicators such as the Human Development Index, a measure of well-being based in equal thirds on gross national income, life expectancy and educational attainment. Other indicators studied include gender equality in educational opportunity and the percentage of students who reach educational milestones. All of these indices improve significantly and roughly linearly with access to electricity. As just one example, both the percentage of people below the poverty line and childhood mortality decline with increasing access to energy1.

Today, some 1.3 billion people – approximately 17 per cent of the global population – are without access to electricity, relying instead on kerosene and traditional biomass including dung and agricultural residues. This access gap has persisted as grid expansion programmes and population have grown.

Grid expansion over the last century has roughly kept pace with the increase in the global population. According to 2013 data, about 1.4 billion people are completely off-grid, and many ostensibly connected people in the developing world experience significant outages that range from 20 to 200 or more days a year. The majority of the off-grid population is in rural and underserved peri-urban areas. Current forecasts predict that this number will remain roughly unchanged until 2030, which would relegate a significant portion of the population and the economies of many of the neediest countries and regions on Earth to fragile, underproductive lives with fewer options than they might otherwise have. Traditional grid extension will be slowest to reach these communities. Unless the advances in both the energy and the information systems that have occurred over the past decade are more widely adopted, there will be little if any chance to alter this trend. 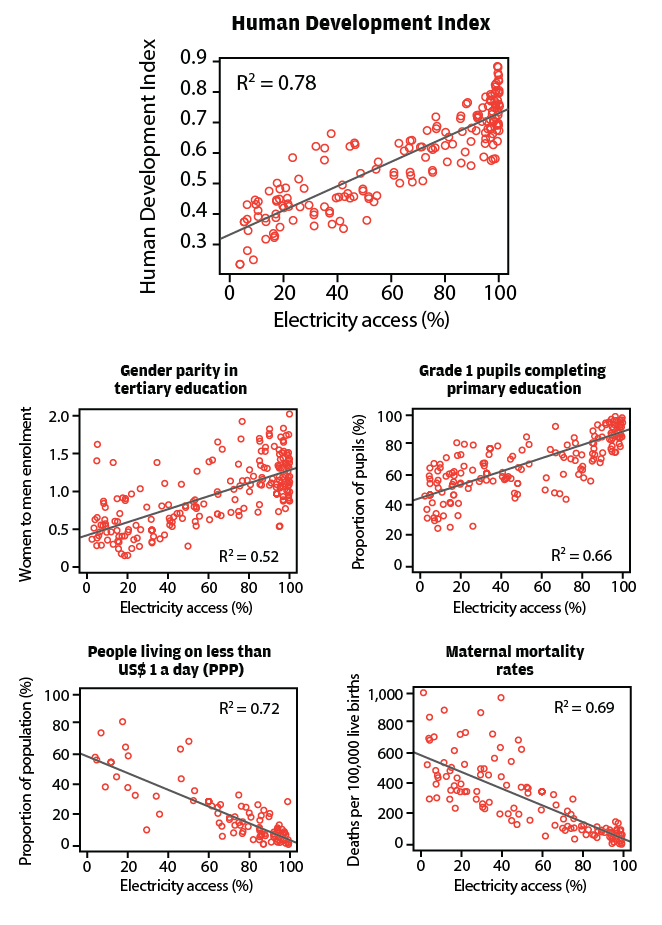 Figure 1 Indicators for quality of life
The Human Development Index (HDI) and various additional metrics of quality of
life are plotted against the percentage of the population with access to electricity. Each data point represents country level data at a specific point in time. For additional data, see Alstone et al.1

We have recently seen the emergence of off-grid electricity systems that do not require the same supporting networks as traditional forms of centralised power generation. These technological innovations are as much based on information systems as they are directly about energy technology. While traditional electricity grids can gradually pay off (amortise) the high costs of generation, transmission and distribution equipment across many customers and many decades, a new business model is needed to rapidly bring energy services to the rural and urban poor. Mini-grids and products for individual user end-use, such as solar home systems (pay-as-you-go), have benefited from dramatic price reductions and advances in the performance of solid state electronics, cellular communications technologies and electronic banking, and from the dramatic decrease in solar energy costs. This mix of technological and market innovation has contributed to a vibrant new energy services sector that in many nations has outpaced traditional grid expansion. 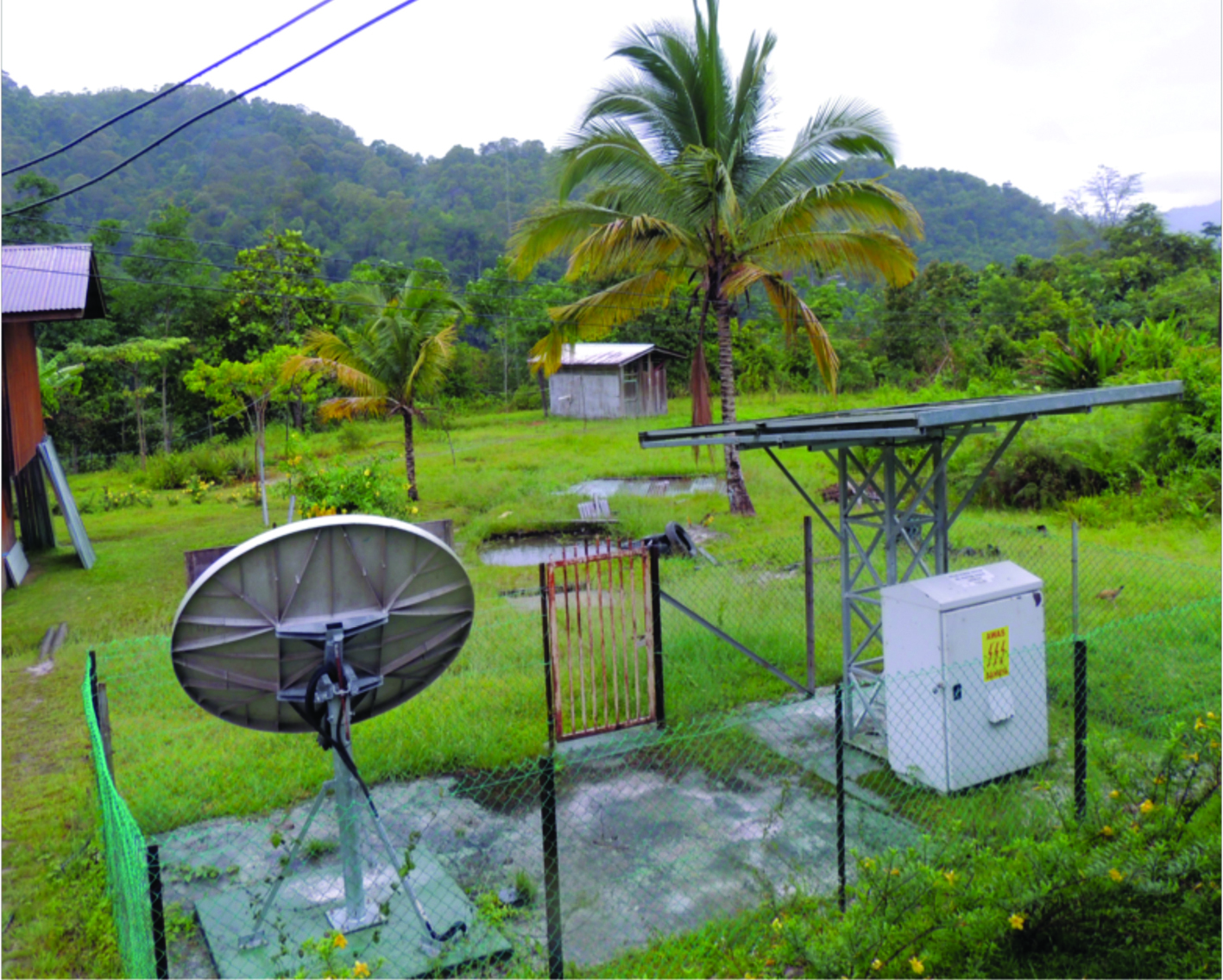 A village micro-grid system in Sabah, Malaysian Borneo. The system serves a community of 200 and provides household energy services, telecoms and satellite (dish shown), and water pumping for fishponds (seen at centre) and refrigeration. The supply includes micro-hydro and solar generation – one small panel is shown here and others are distributed on building rooftops.
Credit: Daniel M. Kammen

The comparison between the traditional utility model of central-station energy systems and this new wave of distributed energy providers is instructive. Traditional dynamo generators and arc lighting perform best at large scale, and they became the mainstay of large-scale electric utilities. But the classic utility model of a one-way flow of energy from power plant to consumer is now rapidly changing. The combination of low-cost solar, micro-hydro and other generation technologies coupled with the electronics needed to manage small-scale power and to communicate with control devices and remote billing systems has changed village energy. High-performance, low-cost photovoltaic generation, paired with advanced batteries and controllers, provides scalable systems across much larger power ranges than central generation, from megawatts down to fractions of a watt.

The rapid and continuing improvements in end-use efficiency for solid-state lighting, direct-current televisions, refrigeration, fans, and information and communication technology (ICT) have resulted in a super-efficiency trend. This progress has enabled decentralised power and appliance systems to compete with conventional equipment for basic household needs. These rapid technological advances in supporting clean energy both on and off the grid are furthermore predicted to continue, a process that has been particularly important at the individual device and household (solar home system) level, and for the emerging world of village mini-grids3.

With these technological cornerstones, aid organisations, governments, academia and the private sector are developing and supporting a wide range of approaches to serve the needs of the poor, including pico-lighting devices – often very small 1–2 watt solar panels charging lithium-ion batteries which in turn power low-cost/high-efficiency light-emitting diode (LED) lamps, solar home systems and community-scale micro- and mini-grids. Decentralised systems are clearly not complete substitutes for a reliable grid connection, but they represent an important level of access until a reliable grid is available and feasible, and a platform from which to develop more distributed energy services. By overcoming access barriers, often through market-based structures, these systems provide entirely new ways of bringing energy services to poor and formerly un-connected people.

Meeting people’s basic lighting and communication needs is an important first step on the modern electricity service ladder4. Eliminating kerosene lighting from a household improves health and safety while providing significantly higher quality and quantities of light. Fuel-based lighting is a US$ 20 billion industry in Africa alone, and tremendous opportunities exist both to reduce energy costs for the poor and to improve the quality of service. Charging a rural or village cell phone can cost US$ 5–10 per kilowatt hour at a pay-for-service charging station, but less than US$ 0.5 via an off-grid product or on a mini-grid.

This investment frees income and also tends to lead to higher rates of use for mobile phones and other small devices. Overall, the first few watts of power mediated through efficient end uses lead to benefits in household health and education as well as a reduction in poverty. Beyond basic needs, there can be a wide range of important and highly valued services from decentralised power – such as television, refrigeration, fans, heating, ventilation and air-conditioning, or motor-driven applications – depending on the power level and its quality along with demand-side efficiency.

Experience with off-grid under-served people confirms the exceptional value derived from the first increment of energy service – equivalent to 0.2–1 watt hour per day for mobile phone charging or the first 100 lumen-hours of light. Given the cost and service level that fuel-based lighting and fee-based mobile phone charging provide as a baseline, simply shifting this expenditure to a range of modern energy technology solutions could provide a much better service, or significant cost savings over the lifetime of a lighting product – typically three to five years.

Box 1 Roadmap to clean energy in a smart village

Mirroring the early development of electric utilities, improvements in underlying technology systems for decentralised power are also being combined with new business models, institutional and regulatory support, and ICT systems5, 6. Historically, the non-technical barriers to adoption have been impediments to widespread access to off-grid electricity, and in some cases they still are. A lack of appropriate investment capital also hampers the establishment and expansion of private-sector initiatives. Furthermore, complex and often perverse policy environments impair entry for clean technologies and entrench incumbent systems. Subsidies for liquid lighting fuels can reduce the incentive to adopt electric lighting. In addition, the prevalence of imperfect or inaccurate information about quality can lead to market spoiling4, and is also manifested by a lack of consumer understanding and awareness of alternatives to their existing lighting technology.

Testing laboratories that rate the quality of the lighting products and disseminate the results are an invaluable step in increasing the quality and competitiveness of new entrants into the off-grid and mini-grid energy services space. The Lighting Global programme (https://www.lightingglobal.org) is one example of an effort that began as an industry watchdog, but has now become an important platform that provides market insights, steers quality assurance frameworks for modern off-grid lighting devices and systems, and promotes sustainability through a partnership with industry.

An action agenda for smart villages

The diversity of new energy service products now available, alongside rapidly increasing demand for information and communication services, water, health and entertainment in villages worldwide, has built a very large demand for reliable and low-cost energy7. Combining this demand with the drive for clean energy brings together two important objectives that were for many years seen as in direct competition: clean energy and the provision of village energy services. To enable and expand this process, an emerging range of design principles can form a roadmap to clean energy economies.

Professor Daniel M. Kammen is Professor of Energy at the University of California, Berkeley, USA, with parallel appointments in the Energy and Resources Group, the Goldman School of Public Policy, and the Department of Nuclear Engineering. He is founding Director of the Renewable and Appropriate Energy Laboratory, University of California, Berkeley.

Permanent link to this article: https://e4sv.org/energy-innovation-smart-villages/