“We are ensuring that electricity is available and all the basic services are available. We don’t provide the electricity and then wait for the rest to happen.”

The first time Shyam Patra visited India’s rural north, he was working for a traditional energy company and helping to pick a suitable location for a power plant. Once construction began, some of the local villages gave up parcels of land so that the power plant could be built; when it was completed, they faced increased pollution of air and water. Yet they did not benefit from the power generated at the plan, all of which was exported. The situation struck Patra as unfair and he began think of ways to help residents of the region.

About a year later, in 2011, Patra founded a new company, Naturetech Infrastructure. The company initially offered picosolar lanterns and cell phone chargers, along with small energy grids that powered 15 to 20 rural households at a time. The company’s staff collected about US$2.00 a month from each household to recover the expenses. 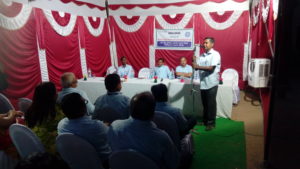 Since then, Naturetech has expanded its offerings in every way. It serves more than 50 villages, all of them in the state of Uttar Pradesh, and a total population of about 50,000 people benefits from the company’s services. Those include not only electricity but also sanitation, drinking water, agricultural irrigation, street lighting, and infrastructure for village marketplaces and schools.

“If in the schools there are no amenities for studies, then there is no opportunity for livelihood,” Patra says. “Then, even if you have a power plant in the village, that won’t ensure the development of the village.”

Residents no longer use kerosene in villages served by the Naturetech, improving the air quality. That’s of particular benefit to women, who are more likely to spend time at home. The quality of drinking water has improved as well, as the company has replaced hand-operated water pumps with electric ones.

Many households in villages served by the company have seen incomes go up due to improved irrigation. “They’re better off because before they farmed only in monsoon season,” Patra says. “Now they’re doing vegetables in the garden year-round.”

Patra estimates that, by generating electricity from solar panels and not from coal, oil, or natural gas, Naturetech prevents the emission of about 250 tonnes of carbon dioxide each year.

The company has seven full-time staff members on its payroll, but hires many more as temporary contractors. It earned about US$125,000 in 2016, primarily through donations received through the Indian government’s Corporate Social Responsibility policy, which since 2014 has required corporations to donate two per cent of their net profit to charity. 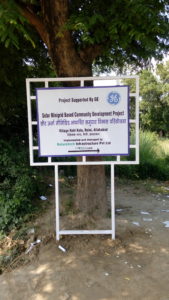 The company’s reliance on this policy points to several serious challenges Naturetech is currently facing. The main problem, Patra says, is that the Indian government already provides some power in all but the most isolated places. But the government does this in a way that is almost free of charge, and provides only eight to 10 hours of power a day. As a result, companies like Naturetech are forced to build a second, parallel electrical grid, and then collect payments from customers accustomed to free or nearly free power.

“Politicians and policy makers see electricity as a way to get votes and they don’t see economics behind it,” Patra says. “All these guys are our customers, but the government power is free of cost. It’s very tough for us to get a sizable amount and recoup the cost of capital.”

Patra has seen other solar companies adapt to the situation by specialising in building power plants for banks, cell phone towers, and other commercial customers that need reliable power. But he doesn’t want Naturetech to go that way. “Primarily, we are the guys who are working at the village level,” he explains. “If we leave that context, then there’s no social component left and it’s purely commercial, and we lose our significance. We lose our social responsibility.”

Policy solutions could make life easier for companies like Naturetech. “They need to withdraw themselves,” he says, referring to the government. “They need to appoint people like us as franchisee: then it is your task to distribute the power and collect money from the customers. If they do that, then we can survive.”

But Patra doesn’t sound optimistic about this change happening anytime soon. He believes that a politician who advocated such a move would quickly lose power. What’s more, the franchisee would have a difficult job because the existing government grids consist of “bare connectors” that make theft easy. “You need to lay a separate set of fully armoured cables with metering,” Patra explains.

Yet the company has plans to increase its revenues even without major policy changes. Patra says Naturetech is developing a new line of “smart meters,” and is currently conducting field trials. The meters simplify rural power delivery because they send data on electricity use to an online app, eliminating the need for manual meter reading and paper bills.

“Everything runs automatically and if a customer doesn’t pay on time, his meter will be turned off,” Patra explains. He says this product will be priced competitively and will be attractive in many markets around the world, particularly in Africa. He expects it to be an important new revenue stream for Naturetech.

Meanwhile, Patra is confident that Naturetech’s approach—packaging services like sanitation and irrigation together with a solar grid—truly encourages sustainable economic development. He’d like to expand to another 50 to 100 villages each year for the next five years, but believes he’ll need “patient capital” to achieve that goal. In other words, he’s seeking financiers who are willing to wait to reap the rewards of growth, and who won’t attempt to change the company’s strategy in order to speed up the process.

Meawhile, opportunities are beginning to emerge from the difficulties in the Indian government’s electrification scheme. In some places, where the grid is particularly weak, the government has begun allowing a private company to manage a local grid for five years at a time.

“The government feels that a solar grid, 20 or 30 kW, is a reliable solution in those villages,” Patra says. “Directly or indirectly, we will get some business.”

Permanent link to this article: https://e4sv.org/interview-shyam-patra-naturetech-infrastructure/