d.light founder: Solar can leapfrog the grid for people living at the “bottom of the pyramid”

“The next step is to get more sustainable fuels into people’s homes”.

“The whole impetus is to save trees,” explains Boston Nyer, BURN’s general manager in Kenya. In East Africa, 60% of deforestation is driven by the need for wood and charcoal for cooking. “Our main founder, Peter Scott, was backpacking around sub-Saharan Africa and saw all the destruction from making charcoal. He thought: ‘How can we provide a better service and product that people will choose of their own accord and that will reduce the amount of trees being cut down?’”

The result is the jikokoa – a cookstove named using two Swahili words; jiko meaning “charcoal stove” and koa meaning “save”. To be more efficient than traditional cookstoves, the jikokoa has extra insulation to optimise combustion and heat transfers, and reflectors to make sure the heat is pushed up into the pot, rather than down towards the ground.

“We went through more than 100 different versions of the cookstoves,” says Nyer. “The first prototypes weren’t received well at all—people thought they were weird. But we kept listening to prospective customers until we ended up with a product that everyone loves. We knew we were ready to launch when everyone in a focus group wanted to buy a prototype from us”. 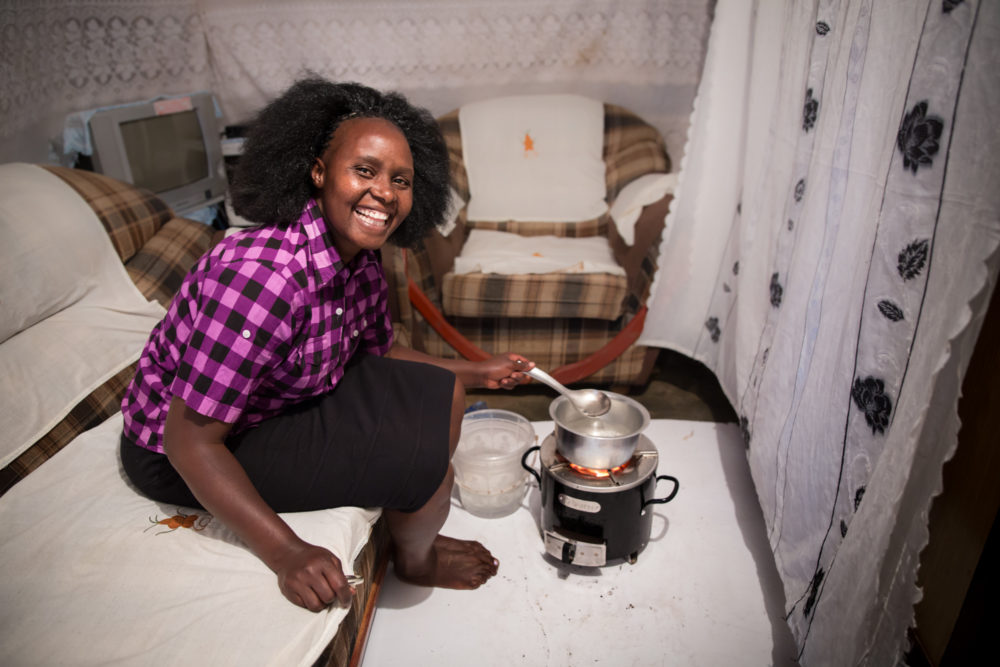 BURN is currently on its third generation of jikokoa cookstove and will be releasing a fourth next year. The company is also looking into producing different varieties of stoves; a bio-ethanol burning stove will be on the market in the middle of 2017, and a stove that uses agricultural waste is currently in research and development. “We’re saving wood and charcoal with the current stove, but we’re still burning a lot of it,” says Nyer. “The next step is to get more sustainable fuels into people’s homes”.

Cooking with wood and charcoal is a major public health risk. More than four million people die prematurely from illnesses attributable to household air pollution caused by cooking with solid fuels, according to the World Health Organisation. Alternative fuels is a growing area of focus in the development sector, and in 2010 the Global Alliance for Clean Cookstoves was founded to encourage changes in cooking methods and the types of stoves used in developing countries.

All of BURN’s cookstoves are made in its factory in Kenya, which was opened in August 2013, two years after the initiative was launched. The factory—which itself is powered by solar—produces more than one stove a minute and the workforce is more than 50% female. “We take pride in that as most factories in Kenya stick to traditional gender roles and have no women working there,” says Nyer. “We try to use our factory as an example of what’s possible”. 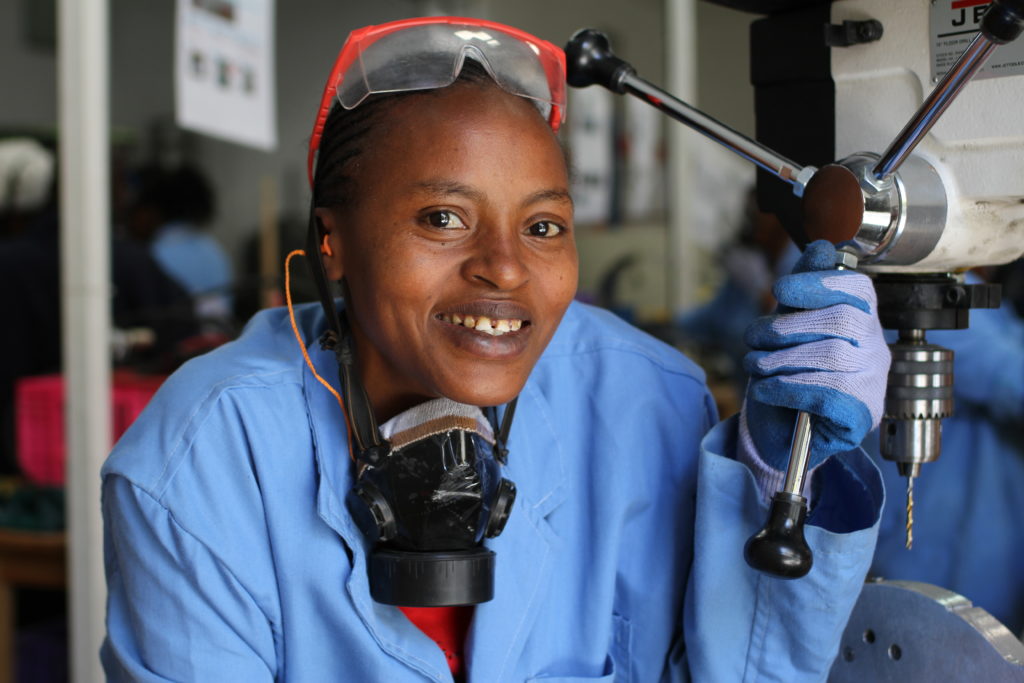 Veronica works in the BURN factory in Kenya

To date, 200,000 BURN cookstoves have been sold; 40% through retail (supermarkets and small shops), 25% through financial institutions (big banks, microfinance, credit cooperatives), and the remainder through a variety of distribution networks working with women’s groups. Each cookstove costs US$35–US$40 before the Kenyan government recently dropped VAT on cookstoves—and pricing plans depend on who customers buy from. “We know that 25% of those who purchase a stove do so through credit,” says Nyer.

If a customer has an issue with a stove, they can send an SMS or call BURN’s customer support team, where they will be direct to one of the organisations service stations: 47 in Kenya, two in Tanzania and one in Uganda. “They’re third party, but we set them up with spare parts and trained them. After they do the service we send them US$2.50 through mobile money. It’s cheap for us and it provides a broad network for customers to get regular service if they have an issue,” says Nyer.

Making sure people have a good experience of using the jikokoa is important for BURN, especially as the organisation has experienced a challenge to encourage people to buy a US$35 cookstove when conventional ones are a tenth of the price.

Another challenge is reaching the scale needed to stop deforestation the way they want to. “If you only have 1% of the Kenya population using clean cookstoves, you’re not going to have a dent on deforestation. But with 10% to 20% of the population using them, you can start to save entire forests,” says Nyer. “We’re currently selling 10,000 cookstoves a month. The next phase is selling 15,000 to 20,000 stoves a month”. 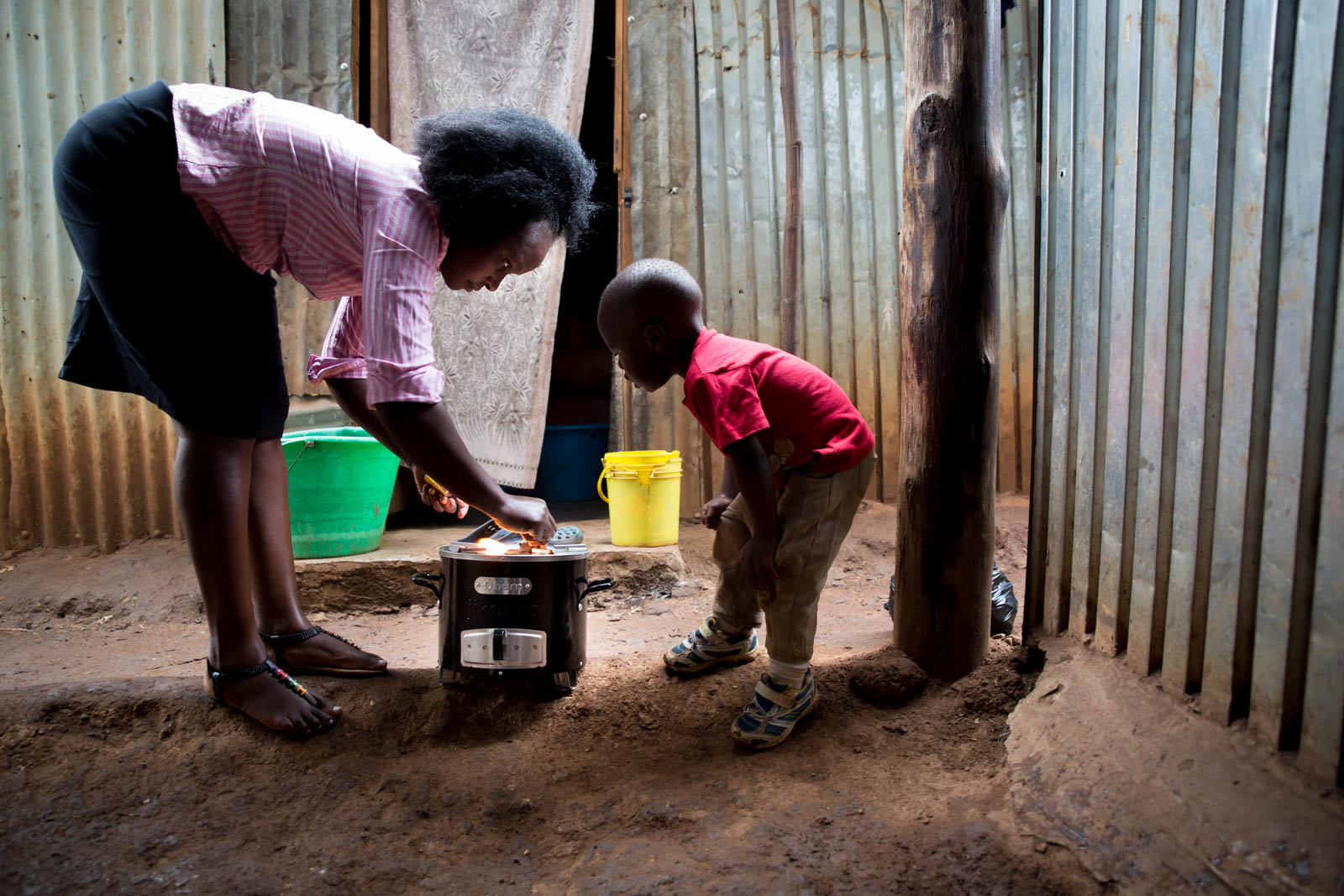 BURN customer and child in Kenya use an improved cookstove

Next year, BURN will expand operations more significantly into Tanzania and Uganda and is planning on opening a factory in Ghana in 2018 to make their cookstoves available in west Africa.

After all, it is BURN’s ultimate aim to provide clean cooking solutions to 900 million people in sub-Saharan Africa—or 1.8 billion by 2050 if the region’s population grows as expected.

“Once you’ve figured out the product, it’s easy to make millions more,” says Nyer. “And as long as you have a product that more people want to buy, there’s nothing stopping you”.

Permanent link to this article: https://e4sv.org/jikokoa-scaling-clean-cookstoves-providing-local-jobs/