Ed- How can science and research help bridge the gap in energy access for some 1.3 billion people living in off-grid communities worldwide? Anna gives her report after attending the Smart Villages Seoul Media Workshop.

Key to this is involving local and university research champions to document lessons in remote communities that are otherwise left off the researcher’s radar due to inaccessibility and lack of baseline research data, explains Dr. van Gevelt.

As a journalist covering energy and city innovations, this “research gap” translates to limited media coverage on the subject as well, a gap which newsrooms can cover to raise awareness on how smart villages can lead to development.

Long-term community engagement is crucial in this type of research as the process of engaging and getting the consent of community leaders or elders is a crucial first step to understand local needs and issues on energy access, notes Dr. Alvin Yeo Wee, director at the Institute of Social Information and Technological Innovation at Universiti Malaysia Sarawak.

“This type of research requires at least five years of engagement, not just one or two years; and researchers should be open to the idea that the community can say ‘no’ to the project. Our long term engagement in Long Puah is key to the project success,” says Dr. Wee.

For the project, Dr. Wee’s research team deployed telecentres to bring energy access to around 3,000 villagers in Long Puah via a VSAT Internet gateway.

Dr. Wee adds that another way to engage communities is to provide them co-authorship in research papers as they help contribute local and sometimes, even indigenous cultural knowledge such as the use of twigs and leaves to communicate in forest villages.

“This promotes a sense of ownership in the knowledge because as researchers, we learn a lot from them,” adds Dr. Wee.

Researchers are currently developing metrics for smart villages based on on-ground developments even if there is no globally accepted definition yet as smart villages is a relatively new concept, notes van Gevelt during a two-day media workshop for Asian and African journalists on 12-23 June, the first of six in-country workshops under the project.

Countries in the region, including Small Island Developing States (SIDS), continue to be exposed to increasingly stronger typhoons. In 2015, typhoon Pam hit Vanuatu; in 2013, Haiyan slammed the Philippines with 21 meter-high storm surges, and in 2008, typhoon Nargis killed about 140,000 in Myanmar.

Environmental stewardship is another feature unique to smart villages both in coastal areas, farmlands, and uplands as its population mainly relies on natural resources for food and jobs.

“Smart villages can become stewards for the environment, ensuring that their development is achieved sustainably with respect to impacts on local environment,” wrote Dr. van Gevelt in the vision paper.

The gap in media coverage on smart villages and universal energy access is a global trend across newsrooms, notes Dr. Julia Vitullo-Martin, a New-York based veteran energy reporter.

“There is a strong case to increase the coverage of smart villages in the context of energy access,” notes Vitulloy-Martin.

One way to do this is for journalists to not limit the coverage in terms of technology or business perspectives but to go in the field to identify local champions. But if this is not possible due to limited time and budget, a story on numbers will be an alternative, says Sharon Schmickle. 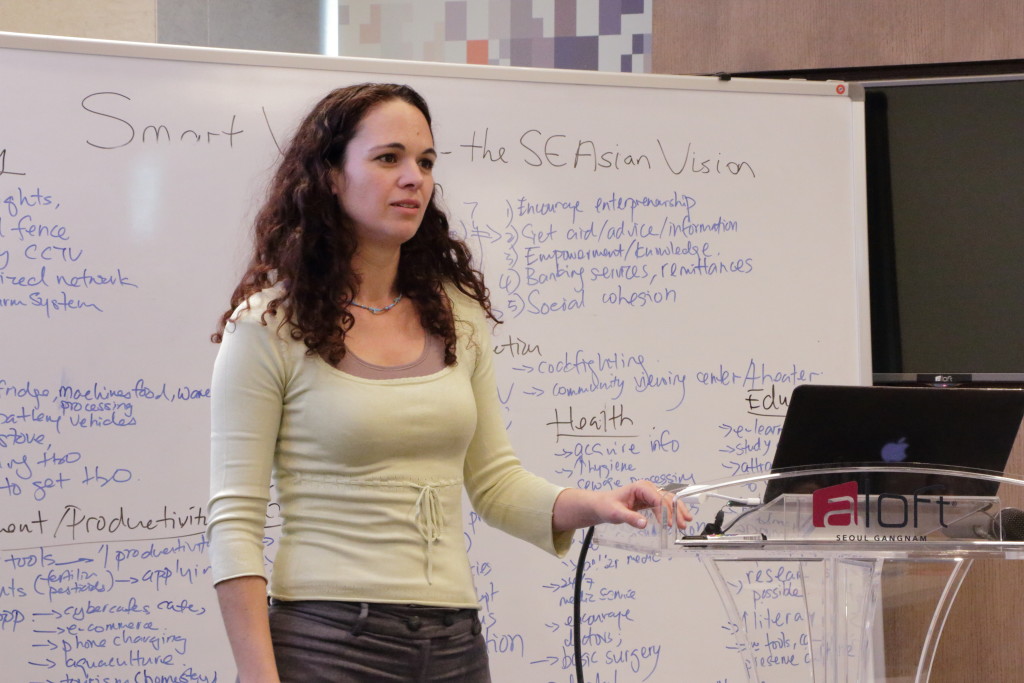 “Smart villages can complement cities in driving growth and development especially if the right enabling conditions such as access to finance, technology and policies are in place,” notes Dr. van Gevelt, who co-authored with Dr. John Holmes a 2015 vision paper on smart villages.

When covering energy conferences and discussing the subject with experts, there seems to be an agreement that there is no one-size-fits-all approach to reaching energy security. Each country has its own resource base, technical capability, and roadmaps for determining an optimal energy mix.

If there is one thing that seems to be a trend in this area that still has to see traction in terms of discussion, it would have been the importance of building energy as part of a village or a city’s resilience against the impacts of disasters.

In most Pacific nations and even in Southeast Asia, which lie along the Pacific typhoon belt, storms are a common occurrence. The Philippines, for example, receives 20 typhoons each year. In 2013, the world saw how a strong typhoon such as Haiyan can damage infrastructure in a developing nation—from energy, communications, and other basic services.

As far back as 2011, some bikers have distributed solar-powered lamps to remote villages in the country. It would be interesting to do an update on this story to see how providing access to power and light, in this case, can help a household. One of the cases noted that a mother who bought the lamp via a long-term payment model saw her kids studying at night, which resulted in them excelling in school and graduating at the top of the class. I am sure there are there more stories like this and it would be good to know the difficulties and challenges as well of projects that aim to bring the grassroots community into action.

In a span of two weeks from Seoul to Manila, I have been reading more on energy than ever and attending insightful sessions on how energy access really is an integral part of development. I hope in the middle of all these discussions, the debate will not end on which way the technology should go or which will bring in the better ROI for investors and countries.

As Dr. Bernie Jones of Smart Villages said during a brief chat at the sidelines of the Asia Clean Energy Forum at ADB’s headquarters this week, it will be good to also highlight the voice of those in off-grid communities who at the end of the day, will benefit most if they gain access and autonomy to use renewables.

How do you make that possible? As my mentor says, go to the field and find out.

Anna Valmero is a journalist covering science, development, cities, health and climate change stories in the Philippines and Asia Pacific.

Permanent link to this article: https://e4sv.org/more-applied-research-news-needed-on-off-grid-smart-villages/