When villages become education hubs: the work of the Akaa Project in Ghana

“Instead of thinking like a manufacturer, I ask how I can best meet people’s needs”

In 2010, less than a year after Shazia Khan co-founded Eco Energy, devastating floods hit Pakistan. Through her non-profit organisation, based in the US, Khan raised US$14,000 via friends and family. “We shifted gears to do flood relief, and it was after distributing 1000 solar lanterns to flood victims, that I realised the scale of the problem”, she explains.

141 million people in Pakistan are under-electrified, and 70 million people are off-grid. To reach people with a more comprehensive solution, Khan relaunched the organisation as a social enterprise. By 2012, Eco Energy had developed a sales, service and distribution network for solar lanterns. These were sold for US$10, in installments of US$2 per month for five months. Four years on, Eco Energy has brought power to about 10,000 off-grid people in rural Pakistan. It has sold over 12,000 solar lanterns, and piloted 100 pay as you go solar home systems.

Shazia Khan has had previous lives as a former environmental lawyer and in international development, where she was inspired by the success of the Grameen Shakti programme in Bangladesh. “I worked as a consultant for the Africa Energy division in the World Bank for a short time,” she says. “My superiors were working on the Inga Dam Power project, which had the ability to electrify all of sub-Saharan Africa and parts of the Middle East. My personal view is that even when large infrastructure projects have great capacity, the power that is generated is used for commercial or industrial purposes, and beyond that keeping tier one and two cities electrified. There is no impact on off-grid and low income communities”.

Pakistan and South Asia more broadly is important to both members of the founding team of Eco Energy. Khan’s parents emigrated from Hyderabad to Upstate New York in 1968; her co-founder, Director of Operations, Jeremy Higgs (@jeremyhiggs), is an Australian software engineer who “is half Chinese, whose wife is Pakistani, speaks Urdu fluently, and who still dresses like an Australian hipster”, laughs Khan. “It was probably being traumatised by the poverty I saw visiting Pakistan as a youngster that shaped me”, adds Khan.

Both Khan and Higgs wanted to solve the critical problem in Pakistan—around 40% of the population has no access to electricity. “There was a good business opportunity in what we wanted to do, but we don’t consider ourselves to be a product development company”, says Khan. “We are really just focused on who is living off-grid, and how to give people a solution, to alleviate poverty. One of the best and easy ways to do is that is to provide basic energy access – you’re giving people an opportunity”. 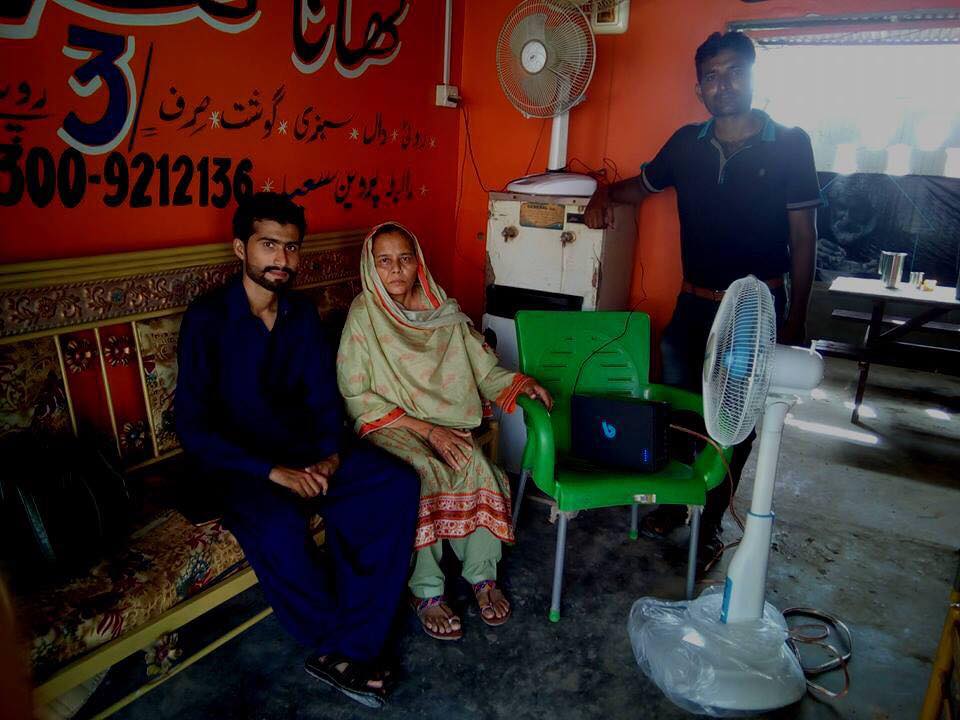 Parveen Saeed, the administrator of Khaana Ghar in Surjani Town, Karachi, with EcoEnergy’s field technician, Faisal. Khaana Ghar is a social cause working to provide a complete meal to the poorest of this city within Rs. 3. Khaana Ghar now has solar powered lighting and a fan to beat those untimely and disruptive electricity cuts in the area. Credit: Eco Energy

Big data for a big impact

Eco Energy has invested a huge amount of time into big data, and what their work could mean to people, as well as finding out who they are. “The lawyer in me is very meticulous and not necessarily data-driven, but I have come to appreciate business”, says Khan. “Instead of thinking like a manufacturer, I ask how I can best meet my client’s needs. I don’t want to come up with a product and shove it down people’s throats. You need to talk to people. You can’t be sitting in a Ivy League tower somewhere and hoping a product takes off, as well-meaning as that product is”.

With a funding round of US$28,000 from ML Resources,, Eco Energy built their team on the ground and collected data for four years. They visited around 2,200 villages and 44,000 households in Pakistan, using a World Bank energy access map as a starting point to the region. The survey asked questions about what people’s current energy needs and income were, and what percentage of their livelihood they were using in energy to determine purchasing power. Higgs was able to then create a mapping tool, inputting data onto the World Bank map. “We had detailed information on how many hours a day people were getting electricity, or how many were truly off grid,” says Khan. “Directly after that, we launched.”

Pioneering pay as you go in Pakistan

A series of further funding rounds helped to shape the enterprise. There was a US$75,000 grant from the National Geographic Society, a US$40,000 grant from the UK-based aid agency GSM Association MECS UK Innovation Fund, and US$41,000 in further fundraising from expats abroad. Eco Energy jumped at the opportunity to pioneer the global pay as you go system in Pakistan. “Introducing mobile money payment connections offered us a lot in terms of payment enforcement,” says Khan. “Our small team had cash on them all the time, which they were going to villages to collect in person. They were getting mugged, and it was a big waste of time. We begged companies to come and bring pay as you go to Pakistan.” Khan reports that there is now a 95% repayment rate, and strategic partnerships with companies such as Telenor Velocity Accelerator. “They have a small stake in our enterprise, and we can access their 70,000 agents; we are doing a pilot with them now”. 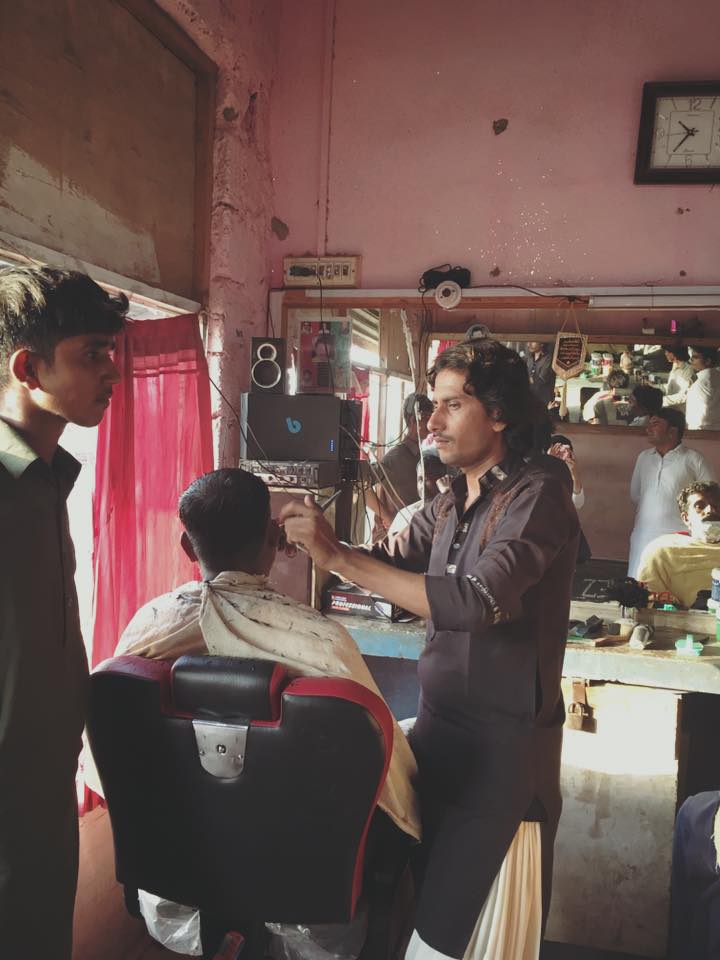 Meet Faiz Muhammad from Sujawal, Sindh. He and his brother run a hair salon for men in the marketplace and have become the first salon to have shavers and trimmers powered by solar energy (along with a solar powered fan to keep customers comfortable). Credit: Eco Energy

Financial inclusion is an important element for Khan and her team. “The people we are reaching are unbanked; our customers are not the type who will walk into a bank and raise money in business. Since they stay with us in perpetuity, we can develop a credit score for them, which they can use when they are talking to banks to see whether they can get a loan. If a farmer needs a tractor, then we can facilitate that with a credit score”.

Khan’s customers eventually wanted more flexibility from Eco Energy, more akin to a utility service. 150 million Pakistanis own mobile phones, almost all of the 191 million in Pakistan want to run a fan because it is so hot. So in early 2015, Eco Energy gradually stepped away from selling solar lanterns, which they had also tested on a pay as you go scheme. Despite talking to people in villages and local retailers, and gathering together a network of 400 people, the team found that they could only make sales on lanterns via the team directly. Negotiating a behavioural shift in the consumers was another problem.  “Now we are looking for the greatest impact we can make – providing people with a utility service, making a monthly affordable payment proportionate to what they want to spend. It can be US$8 a month for two lights in a house, or replacing a diesel generator”.

A solar home system, Khan explains, is a control unit with a battery in the circuit board; the latter allows for mobile money payment, and collects data, such as what time of day the device is most used. There are USB inputs connected to a solar panel which can power a phone, as well as a television or DVD player amongst other devices. One of the interesting things that the team found is that systems can short out, because the customer may be using a 50 watt system instead of an 80 Watt system. “We saw the bigger picture,” says Khan. “Pakistanis need an 80 Watt charge at minimum; people all over the country need to be able to run fans 24 hours a day, especially if they run a business”.

As well as shifting their business model early on and their choice of product, a further evolution for Eco Energy was to move from providing for households to small business owners. “We’re strapped for resources, but we wanted to show people how they could earn more money”, says Khan. Soon, energy access became a revenue generating project for paan-wallas (betel leaf traders) like Aijaz Pitafi. “People used to spend 80 rupees on transport to their nearest charging stations, and then a further 10 rupees to charge their phones”, says Khan. “So we leased Aijaz a mobile phone charging station to charge 10 phones. He and his customers are now both earning and saving around 240 rupees a week, because they can just charge their phone in his shop; even the tea guy next door is getting more income thanks to the extra custom”.

The next step, says Khan, is to go “further upstream”, and investigate how energy access can help dairy and poultry farmers in off-grid communities, which have a 90% spoilage of products as there is no option for refrigeration. “Just by implementing or integrating small chilling mechanism using solar, they’re able to be more productive”, reflects Khan.

To reach a goal of 50,000 customers over the next three years, the social enterprise is focussed on two key things. Firstly, a million dollar equity raise to finance the operations and infrastructure that is needed, and a simultaneous fundraising round to deal with inventory. “Pakistanis are very generous in the mode of giving and have been very supportive, but they don’t understand the concept of social enterprise as much”, says Khan, on why she won’t be fundraising amidst the expat community for now. “We needed to shift to a social enterprise model to create something long lasting and sustainable; we’re talking to investors with experience in emerging markets, as Pakistani banks are very risk averse”.

Two years ago, Khan took her father on a field visit, which was a rewarding experience. “I feel so happy every single day that I do something that I love everyday, and can sit in the gao (village) and talk with people who talk like me, and get to know them”.

Permanent link to this article: https://e4sv.org/raising-us1-million-equity-take-off-grid-energy-pakistan-next-level/