What do Perovskites mean for the Photovoltaic Industry?

I once visited my local newspaper printing press. The machinery was immense. Two tonne rolls of paper were fed continuously into the ink rollers at fantastic speed. Conveyer belt contraptions whizzed partially folded newspapers around the factory with a frenetic industriousness. The whole apparatus would spit out 12 newspapers a second.

Now imagine that it was spitting out solar panels instead.

This is the vision that has motivated thousands of materials scientists, physicists and chemists over the last 20 years—to be able to solution-process semiconductors into high efficiency photovoltaic (PV) devices. Being able to do this simple solution-processing might mean that we could manufacture photovoltaics in a similar way to how we currently print newspapers. The process would simply ‘squirt’ the useful material onto a substrate to make a solar cell.

This would certainly save an awful lot of costs and hassle compared to the way that the dominant technology—silicon-based PV—is currently manufactured. Making silicon PVs requires heavy amounts of purification, high temperatures, perfectly controlled crystal growth and a lot of expensive material waste produced from cutting out each ‘slice’ of silicon.

For years researchers have been searching for materials that would fulfill the duel criteria of easy processing and high solar-to-electric conversion efficiency. It now seems like we have found an ideal candidate. ‘Perovskite solar cells’ have a current efficiency record of just over 20% and climbing. Comparing the progress in their efficiencies to other thin-film or solution-processable technologies (as shown by the near-vertical blue line in the figure below), it is easy to see what all the excitement is about. 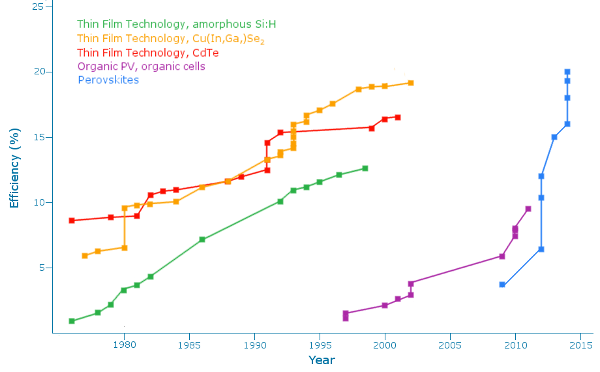 Named in honour of the Russian nobleman and mineralogist Count Lev Perovski, the term ‘Perovskite’ refers to a class of crystal structure, rather than a particular material, so there are actually many different types of perovskites. The particular perovskites causing waves in the photovoltaic world have a chemical formula that is made up of a small organic (carbon-based) molecule, some lead and a proportion of iodide.

Before moving to Smart Villages, I spent the last three years in a lab studying the physical and electrical properties of these perovskite materials. The results astounded me and continue to amaze the rest of the solar cell research community. We have found materials that have all the right attributes for a successful solar cell—they absorb light well, they convert that light to free electrons super efficiently and they can transport those electrons efficiently to an external circuit. Additionally, they are made of cheap and abundant materials in a relatively simple way.

So what’s to stop them being rapidly commercialised and put on everyone’s roofs immediately?

There are a few challenges that need to be dealt with if perovskites are going to be a commercial reality. The key hurdle is stability. What makes the perovskites so attractive—their ability to be dissolved in solution easily for simple processing—also means that even once they are deposited and ‘cooked’ onto a piece of glass or transparent plastic, they can be easily damaged by moisture.

There is good evidence that this can be dealt with by sealing the perovskite device from the air effectively, but there is still a desperate need for a large research effort into studying how long these devices really last and how they fail when they’ve stopped lasting. Unfortunately these studies take a rather long time, and aren’t intellectually stimulating enough for many academics’ tastes.

The other caveat is the presence of lead. Lead should definitely be avoided if it can be managed because it is toxic to health and toxic to the environment. There has been some progress in making lead-free perovskite solar cells, but the performances so far are not nearly as spectacular as their lead counterparts. One fact to bear in mind is the amount of lead actually used. The perovskite part of a solar cell is only a few hundred nanometers thick, meaning that there is less than half a gram of lead per square meter.

Comparing a field of perovskite solar cells to a clean coal plant of the same generating capacity, estimates suggest that the coal plant would still emit more lead into the air than the perovskite solar farm would leach into the ground through panel failure. Then again, practically anything is better than coal, so maybe this is not such a good yardstick. We should certainly continue to search for ways of making perovskites cleaner.

No one can deny that silicon photovoltaics have steadily and impressively dropped in price as they are deployed more widely across the globe. They offer a product that is very very hard to beat. Another truly exciting aspects about the perovskites is that they can be applied to a whole host of other uses besides solar cells. For instance, an interesting result from my research has shown that these perovskite materials can be used to make lasers and LEDs as well as solar cells.

There is enormous versatility just within the solar cell market. ‘Building-integrated PV’ incorporates semi-transparent solar cells into the glass and windows used for skyscrapers and other buildings. This concept hints at an enormous and untapped market to which perovskites are ideally suited. Oxford Photovoltaics, a spin-out company from Oxford University and one of the leading research groups in the field  is already attempting to make this a reality. 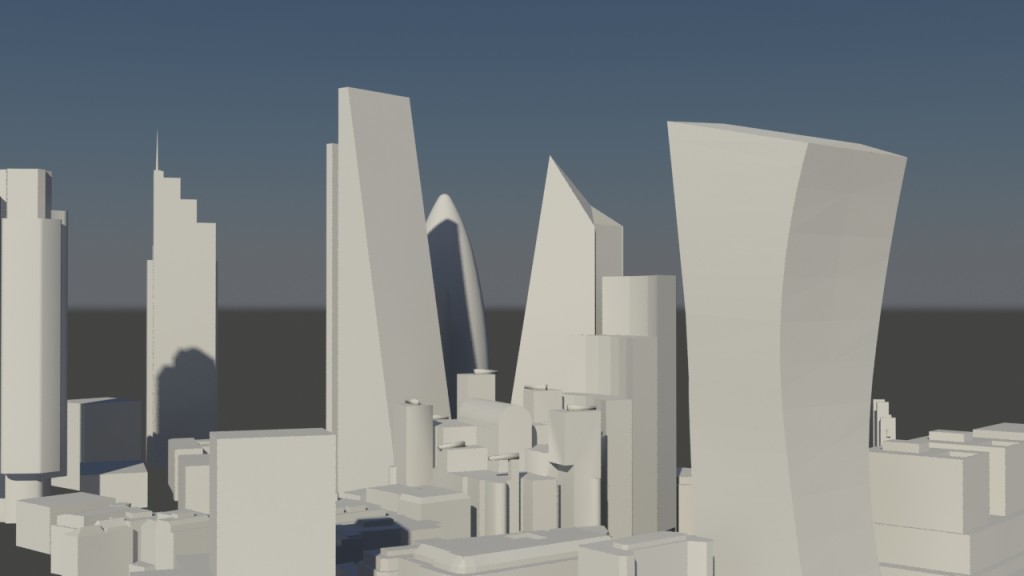 Oxford PV have created simulation models to highlight the capability of the perovskite solar cells, for applications in buildings as BIPV modules, and for boosting the performance of silicon or CIGS solar cells through our tandem activities.

I also see perovskites making an impact in markets where amorphous silicon solar cells (a cheap and inefficient form of non-crystalline, rather than crystalline, silicon solar cells) are dominant, for instance in the ‘pico solar’ lantern industry. This is naturally something that we here at Smart Villages need keep up to date with.

Apparently the printing press I visited when I was younger is no longer running. Life is tough in the newspaper industry at the moment, with more and more of us choosing to read our news online than on paper. The outlook for print newspapers may be bleak, but for perovskite photovoltaics the future is bright as the sun.

Permanent link to this article: https://e4sv.org/what-does-perovskite-mean-for-the-photovoltaic-industry/