The right to vote is generally considered a fundamental right of each citizen, underpinning all other basic rights – to food, education and security. And the world’s most enthusiastic voters live in India’s 650,000 villages. At the heart of India’s democratic system have been regular elections that now see the participation of more than 100 political parties and the largest electorate in the world, currently numbering some 815 million people. The most dedicated voters are not the well-educated urban middle classes but the poorest, most discriminated against and least educated, mainly in villages and small towns, where turnout rates can be well over 80 per cent. Further, the more local the election, the higher the turnout, bucking global trends: in rural India, the turnout at neighbourhood elections is close to 100 per cent. Contrary to what many predicted in 1947, when India gained independence and chose to become a democratic republic granting universal suffrage to all its citizens, poverty and illiteracy have not hampered democracy.

At the most fundamental level, there is tremendous pressure not to waste a vote, as illustrated by a simple procedure carried out by the Electoral Commission of India. In all Indian elections, each voter has their left index finger marked with a short vertical line in indelible black ink. This procedure is carried out to prevent fraud, but it has also made it impossible to lie about whether one has voted. So it creates peer pressure to go and vote, particularly in the little world of the village, for not to do so results in suspicion about the abstention. Not losing face in small rural communities, whether among kin or party workers, is an important factor explaining high turnout rates.

More recently, India’s electronic voting machines have revolutionised the electoral process. Over the last two decades, a series of closely monitored pilot projects have taken the complex process of casting a vote away from a paper ballot to very basic electronic machines, often powered by batteries, which the electorate of India has accepted and which have proved to be both fraud- and fool-proof. India is now a world leader in demonstrating how a simple but smart machine can revolutionise the running of a political system through accuracy and veracity, making it accessible to the illiterate, the innumerate and the disadvantaged.

At an informal workshop of the South Asian Association for Regional Cooperation (SAARC), held in Alleppey, Kerala, in 2011, Election Commissioners specifically devoted their discussions to the game-changing impact of electronic voting machines. India’s neighbours – Bangladesh, Bhutan, Nepal, Pakistan and Sri Lanka – had all demonstrated their potential and the Commissioners agreed that this was the way forward. Now manufactured in India by two separate government-sponsored bodies, the machines are both affordable and scalable, with a million of them being used in each general election.

At another of the SAARC workshops, the Indian Election Commission underlined how they use local sources of electricity to power video cameras and to contact voters and parties in order better to regulate the elections, thereby making the rural electorate familiar with the uses, rather than abuses, of electrically powered devices as a means of ensuring the basic right from which all other rights in their society flow. 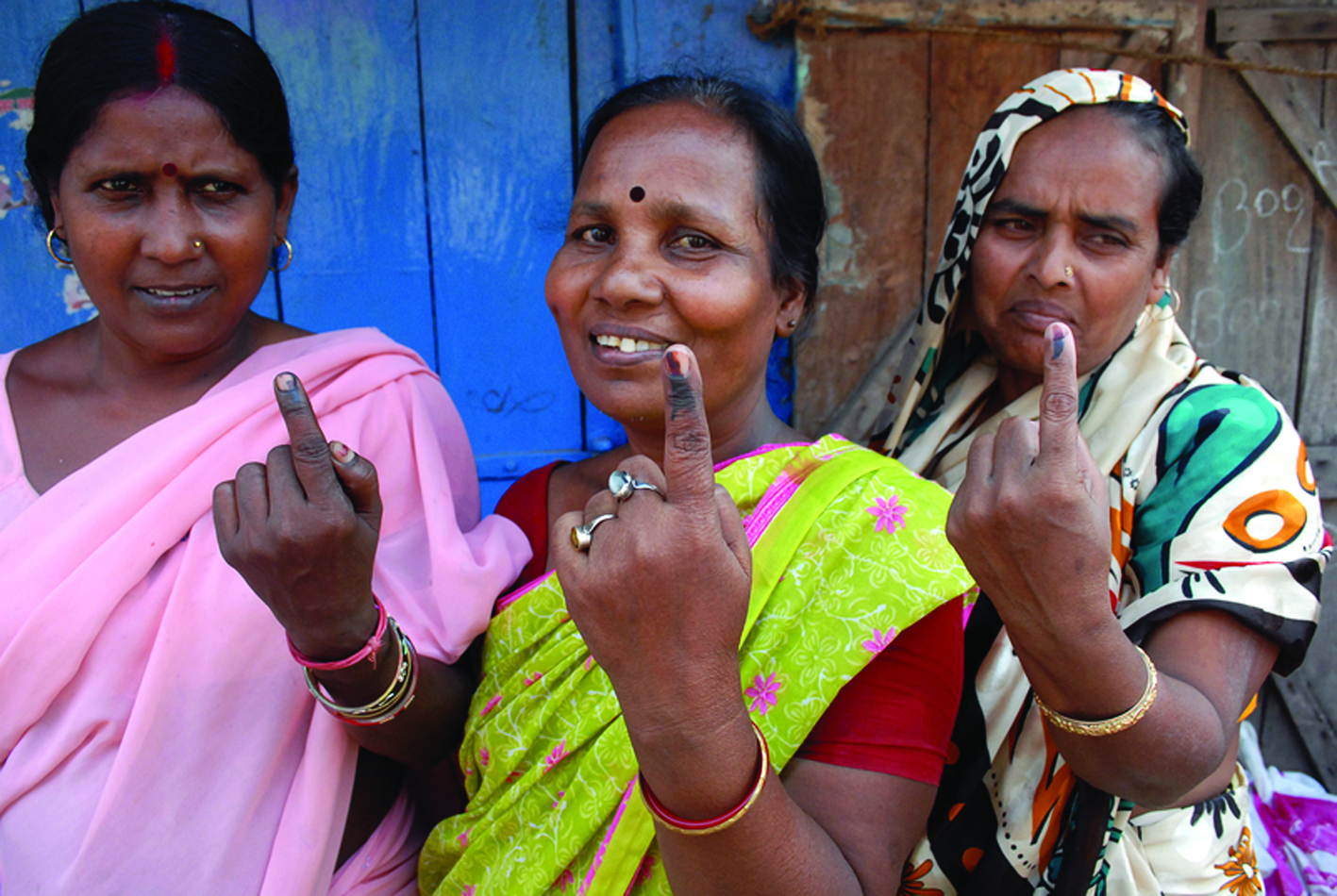 India’s voter power, as indelible as the ink on fingers.
Credit: Samrat35/Dreamstime.com

So why does rural India cast its votes so enthusiastically despite the sustained failure of the Indian state to improve the living standards of its poorest citizens? Is it because the poor are ignorant and don’t know better? Are they gullible and vulnerable to vote buying and empty campaign promises? Or are they prey to bullying and violence? These are important questions and recent ethnographic research carried out nationally provides some insights.

One important reason why the rural electorate participates so enthusiastically in elections is because they hope their numbers and their votes for specific candidates and political parties will act as pressure for the delivery of these missing services. Sometimes this does bear fruit: a long-promised bridge materialises or a village finally gets its own primary health centre. But on the whole, such developments are often random and rely on serendipity rather than a concerted design for rural India. There is not, for instance, a concerted programme for smart villages to mirror the much-hyped smart city agenda. Democratically elected Panchayats have no coordinated action plan for delivery of services at the village level: at the most local level, there is not even administrative back-up for their budget allocation plans.

As a result, rural India has some of the worst infrastructure in the world, with access to basic services like water, electricity and roads a luxury for most villagers. In a community in West Bengal investigated in 2011, the electricity supply had reached fewer than half the homes, there was no piped water, only two households had a refrigerator, people were still dying of preventable diseases such as jaundice, and the roads both within the village and linking it to the outside world were all kuchcha (not macadamised). A combination of factors – no industry and few job opportunities, obstacles to paddy cultivation and bad connectivity – meant that there were only three main sources of income: sale of pilfered coal, mining sand from the nearby river bed and poppy cultivation, each of which was illegal. People said they did not want to break the law but had no other options for survival.

It is for this reason that elections have emerged as a moment when hope for a better life is reignited in the electorate, a moment when politicians have to account for their neglect of their constituencies and beg a second chance. During long and exhausting election campaigns in large and diverse constituencies – a parliamentary constituency in India is almost 20 times the size of one in the UK – the laundered clothes of rich politicians become sullied by journeys on dusty roads, their arrogant heads must bend to enter the modest huts of the poor, and their hands must fold in a plea for votes. Election campaigns therefore have a levelling effect, as the powerful are humbled and the ordinary voter finds a voice.

Unquestionably, research shows, most citizens in India are clear-eyed about the venality of politicians, the importance of their own role in the working of the democratic system and the effect their individual vote has in determining the composition of government. “The vote is our weapon” is a statement often used to explain this sense of empowerment. The electorate believes in the efficacy of multi-party democracy and regularly held elections because it is felt that only through these institutions can governments be forced to respond to popular pressure and be punished for bad performance. The fact that incumbent governments are frequently thrown out, or indeed rewarded with re-election, is proof of this. “Without us, the system is nothing,” is how ordinary voters emphasise their role. Thus Indian voters see electoral participation as fundamental to their engagement with the state, and their presence on the voting list a rare but valued official acknowledgement of their existence. People often use the word “duty” while describing the importance of voting; a typical formulation states: “it is my right to vote and it is my duty to exercise this right. If I don’t discharge this duty, it is meaningless to have this right”.

Another factor is the visceral experience of actually voting. The culture of a polling station fosters order – disciplined queues, respect for the ordinary person of whatever social background, efficiency of process and trust in the system, all of which are rare commodities in Indian public life. In addition, here, the only relevant identity of a person is his electoral photo identity card, which carries nothing but the most basic information. As people arrive to vote, no preference is made on the basis of wealth, status or any other social marker, and officials treat everyone the same. In India, with its ubiquitous and daily practices of discrimination on grounds of caste, colour, class and religion – and those who live in India’s villages experience these acutely – this extraordinary glimpse of egalitarianism is valued. Further, people have often pointed out that the knowledge that each vote is of equal value to any other heightens its importance even more.

So we can conclude that the rural voter in India’s democracy is smart and politically savvy, even to the acceptance of new technology. It is clear that within 60 years voters have embraced electoral democracy, and electronic voting machines have helped to make it a meaningful participatory process through which people renew their own citizenship but also hope to hold the political class to account. Where this faith has been repeatedly thwarted by the non-performance of successive governments, Indian rural voters have displayed sophistication despite the distinctly “un-smart” surroundings of a large proportion of their villages. There is limited access to news, literacy, information – all of which severely hampers people’s ability to make use of state schemes, opportunities, loans, programmes or other avenues that could make their lives better. Despite this, Indian voters have managed to maintain their enthusiasm for democracy and imbue it with significance. It is now time to deliver smart villages to these smart voters.

Dr Mukulika Banerjee is Associate Professor in Social Anthropology at the London School of Economics and Political Science (LSE) and Inaugural Director of the LSE’s South Asia Centre; she is the author of Why India Votes? (2014) and of a forthcoming monograph based on 15 years of research in a village in India.