In spite of much technological progress, many countries as well as communities within countries suffer from food insecurity; one in seven people in the developing world remains food insecure.

Food security involves concurrent attention to availability, which is a function of production; access, which is a function of purchasing power; and absorption, which is a function of nutritional literacy, alongside attention to clean drinking water. Food security also involves steps to overcome protein hunger arising from the inadequate consumption of grain legumes, milk or animal products that are rich in protein content. In addition, there is the need to attend to micronutrient malnutrition caused by deficiency in the diet of iron, iodine, zinc, vitamin A and vitamin B12, among others. This is why, in programmes designed to ensure the health of the population, overcoming under- and malnutrition to ensure food security and the provision of non-food necessities like sanitation and primary health care need integrated attention. This is particularly so in off-grid villages where such provisions are sparse and agricultural activities are frequently at a subsistence level.

Food security is a concern for countries at low levels of economic development since a fall in food consumption may have serious irreversible nutritional consequences for both present and future generations. Off-grid villages are particularly vulnerable because the lack of electricity means a reduced capacity to run equipment such as machinery needed for cultivation and irrigation, and an inability to develop small-scale village industries locally1. However, an off-grid village does not really mean a no-energy village. For years, smallholder farmers in less developed countries, many living in off-grid villages, have relied on farm animals for draught purposes, supplemented with the labour of rural women and men belonging to family farms as well as landless families. This means that even today there is hardly a village in India without some form of energy, albeit limited. Villages in northeastern India have a shortage of energy for farm operations due to the insufficient number of farm animals. According to the Central Rice Research Institute, Cuttack, India, the yields of paddy in eastern India remain low due to inadequate bullock power. The situation can be remedied either by increasing animal power or by mechanisation. A smart village, therefore, would adopt and encompass some of the promising new renewable technologies that could lead to sustainable energy provision, increased food production and value-added outputs. 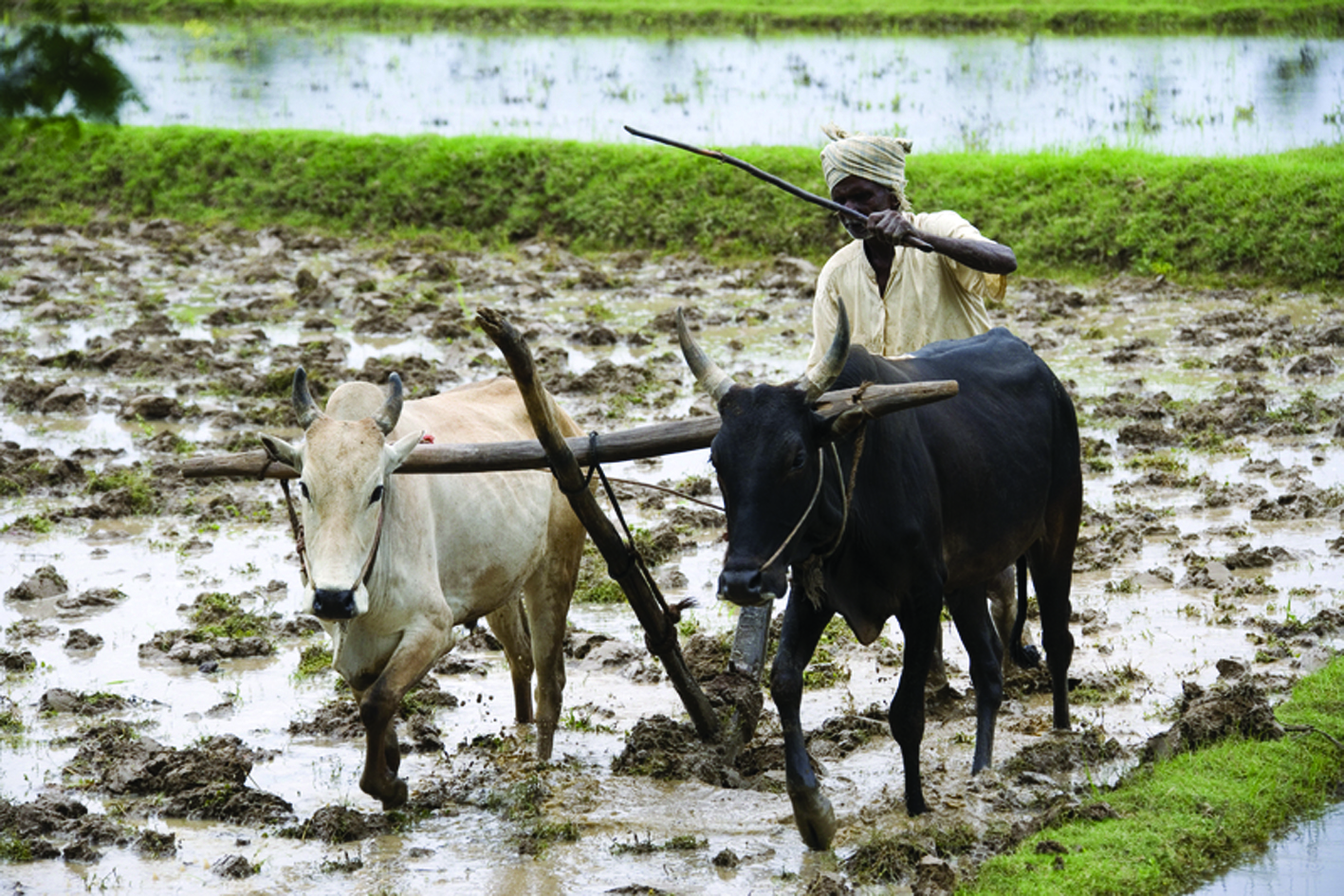 With modern agriculture, particularly after the green revolution era of the 1960s, a heavy dependence on energy has developed. There is a strong positive correlation between energy input and food output, and from the last century onwards productivity advance has been related to the industrial production and consumption of mineral fertilisers and chemical pesticides. Agricultural mechanisation, post-harvest drying and processing, as well as groundwater pumping, make heavy demands on energy supply. According to estimates from the Food and Agriculture Organization of the United Nations, the dependence of agriculture on fossil energy means that the global average energy requirement to produce 1 tonne of cereal is about 85 kilograms of oil equivalent (kgoe); it can be as low as 20 kgoe per tonne in Africa through traditional methods, and as high as 116 kgoe per tonne in Western countries through industrialisation. A similar picture has been seen with maize grown in the USA or in Mexico2.

The intensification and industrialisation of agriculture in developed countries has given rise to an increasing dependence on fossil fuels for providing nutrients for crops and also for groundwater extraction and irrigation. This has raised concerns about environmental issues and greenhouse gas emissions, as illustrated by predictions made in 1968 (Box 1).

Paradoxically, government agencies continue to promote the use of fossil energy in the tropics and sub-tropics, which are richly endowed with solar energy. So the vision of a smart village described in this collection of essays foresees an alternative scenario – renewable energy as a catalyst for development. It resonates with the idea of sustainable processes for rural development, a concept developed some years ago in the context of an evergreen revolution involving increases in productivity in perpetuity without the ecological harm referred to in Box 13.

Box 1 The dangers of excessive use of fossil-fuel-based inputs
Intensive cultivation of land without conservation of soil fertility and soil structure would lead ultimately to the springing up of deserts. Irrigation without arrangements for drainage would result in soils getting alkaline or saline. Indiscriminate use of pesticides, fungicides and herbicides could cause adverse changes in biological balance as well as lead to an increase in the incidence of cancer and other diseases, through the toxic residues present in the grains or other edible parts. Unscientific tapping of underground water would lead to the rapid exhaustion of this wonderful capital resource left to us through ages of natural farming. The rapid replacement of numerous locally adapted varieties with one or two high yielding strains in large contiguous areas would result in the spread of serious diseases capable of wiping out entire crops, as happened prior to the Irish potato famine of 1845 and the Bengal rice famine of 1942. Therefore, the initiation of exploitative agriculture without a proper understanding of the various consequences of every one of the changes introduced into traditional agriculture and without first building up a proper scientific and training base to sustain it, may only lead us into an era of agricultural disaster in the long run, rather than to an era of agricultural prosperity.M.S. Swaminathan, Indian Science Congress, Varanasi, January 1968

Evergreen revolution technology involves integrated natural resources management and limited use of fossil-fuel-based energy. Smart villages for those who live off grid should, therefore, involve a low-carbon development pathway. For this we should promote the use of biomass for electrification, biogas, wind, solar power and ocean thermal energy (where oceans are nearby). In addition, increasing the productivity of crops through the efficient use of energy and advances in plant breeding should be associated with steps for feeding the crop in a sustainable manner. Breeding and feeding for high yield should go together.

The adoption of renewable and sustainable energy sources for food security needs to consider the impact on land and biodiversity. Recently, Brook and Bradshaw4 evaluated the land-use, emissions, climate and cost implications of energy sources such as coal, gas, nuclear, biomass, hydro, wind and solar. The analyses showed that nuclear and wind energy had the highest benefit-to-cost ratio; the new-generation nuclear reactor technologies that are designed to fully recycle waste and incorporate passive safety systems seem quite dependable for generating sustainable clean and safe energy.

While nuclear energy is environmentally benign and can supply electricity to industries as well as households over long periods of time without also generating greenhouse gases, the impact of chronic doses of radiation on human health will continue to demand careful study. Its use for agriculture, however, is limited, particularly for villages remote from the grid where, as mentioned previously, greater food security will depend on renewable bioenergy supplied by wind, solar, biomass and hydro, or relevant hybrid combinations. Nonetheless, coastal villages in India, with its extensive coastline of about 7,600 kilometres, could benefit from nuclear energy since the nuclear power plants are mostly located in the coastal regions – but this will depend on the adequacy of grid infrastructure.

Alternative means of providing nitrogen for plant growth have long been a dream of plant breeders, since they would reduce the need for energy-dependent chemical fertilisers. Leguminous crops like Sesbania rostrata have stem nodules that can enrich the soil by about 80 kilograms of nitrogen per hectare. The African tree Faidherbia albida is ideal to fix nitrogen in its leaves, which are subsequently incorporated into the soil. Uniquely, these “fertiliser factories in the field” do not compete with the crops for light, water and various soil nutrients other than nitrogen. Chinese and Japanese agricultural scientists have developed strategies to harness the organic matter in the soil, which contains microorganisms rich in phosphorus, potassium and several micronutrients, to enhance the productivity of crops with little in the way of energy-consuming chemical inputs4, 5. Entrepreneurs who promote eco-agriculture and the evergreen revolution referred to previously provide livelihoods to the landless women in using their manual energy largely to produce vermicompost, green manure, biofertilisers and biopesticides.

Therefore, the vision for an off-grid smart village from an Indian perspective is one that achieves food security by using pathways of production that depend increasingly on biological rather than chemical inputs. In this way, renewable and decentralised energy services will provide the motive power required for machinery and irrigation, the development of cold-chain infrastructure to reduce waste, and the integration of communication technologies to help with pest management, soil health and improved market access. Entrepreneurial initiatives directed towards eco-agriculture will enhance food production in off-grid villages, whether by “fertiliser trees” and biogas plants, or water-harvesting structures such as Jal Kund, a simple and low-cost rainwater-harvesting structure which has been developed for storing rainwater in the upper terrace conditions of northeast India.

Sustainable food security is a must, and we have to produce more and more food grains and other agricultural products from diminishing available per-person land and water resources alongside expanding biotic and abiotic stresses. The smart village keeps in mind the urgent need to foster the evergreen revolution pathway of ensuring food for all and forever. The strategy of renewable energy provision will be crucial for achieving these goals.

To sum up, for a healthy and productive life we need physical and economic access to a balanced diet, clean drinking water, sanitation, primary health care and nutritional literacy. The concept of food security was in the past restricted to adequate calorie consumption, while nutrition security involved giving attention to all forms of hunger, namely calorie adequacy, clean drinking water, and avoiding a paucity of protein and other hidden hunger. Today, food security and energy security are even more closely related, but they need the underpinning of environmental security and sustainability, particularly as our attention turns towards those who live in off-grid villages and their need to achieve food security using appropriate modern technologies.

Professor M.S. Swaminathan, Emeritus Chairman and Chief Mentor of the M.S. Swaminathan Research Foundation, was acclaimed by TIME magazine as one of the 20 most influential Asians of the 20th century and acknowledged by the United Nations Environment Programme as “the father of economic ecology”.

Permanent link to this article: https://e4sv.org/energy-provision-food-security-off-grid-villages/