“Go where nobody else has got to yet.”

Simon Bransfield-Garth is on the cutting edge of the solar pay-as-you-go market for rural communities in sub-Saharan Africa. Founder of Azuri Technologies, Bransfield-Garth is a serial entrepreneur with a passion for technology. He has been named a World Economic Forum Technology Pioneer. In this interview, he shares his motivations for becoming an entrepreneur and offers some advice to budding entrepreneurs.

Simon Bransfield-Garth has been passionate about engineering since he was 12 years old, when he started working on computers for the first time. At 16, he built a microcomputer. He happened to live in the same town as Texas Instruments in the United Kingdom and had the opportunity to work for them in the mid-1970s before heading to university. After university, he earned his Ph.D. in Engineering at Cambridge University and stayed on as part of the research faculty.

“I worked on all kinds of interesting stuff, like artificial neural networks. I ended up setting up a company making cards that plugged into PCs and gave the PC workstation computing power for more complex tasks, like graphic design, real-time simulators, etc. Ever since then, I’ve been involved in or running high-tech companies—automotive, semi-conductors, and mobile phones”, he commented.

His work with solar energy technologies began when he became the CEO of Eight19 in 2010, a precursor to Azuri Technologies, where he became CEO 2012. According to Bransfield-Garth, “I really fell into Eight19—a Cambridge University spin-out aiming to make a new generation of solar panels. When the company was formed, solar panels cost $5 per watt—but by the time I arrived, they were selling for $1/watt.” With this dramatic reduction in market price for competing solar panels, the business case for the company completely changed. They began looking at new markets where solar was not well established and sub-Saharan Africa stood out. Eight19 was then divided into two businesses: Azuri became a business focused on pay-as-you-go (PAYG) solar, essentially a distribution business within Africa, and Eight19 retained the solar cell technology activity. 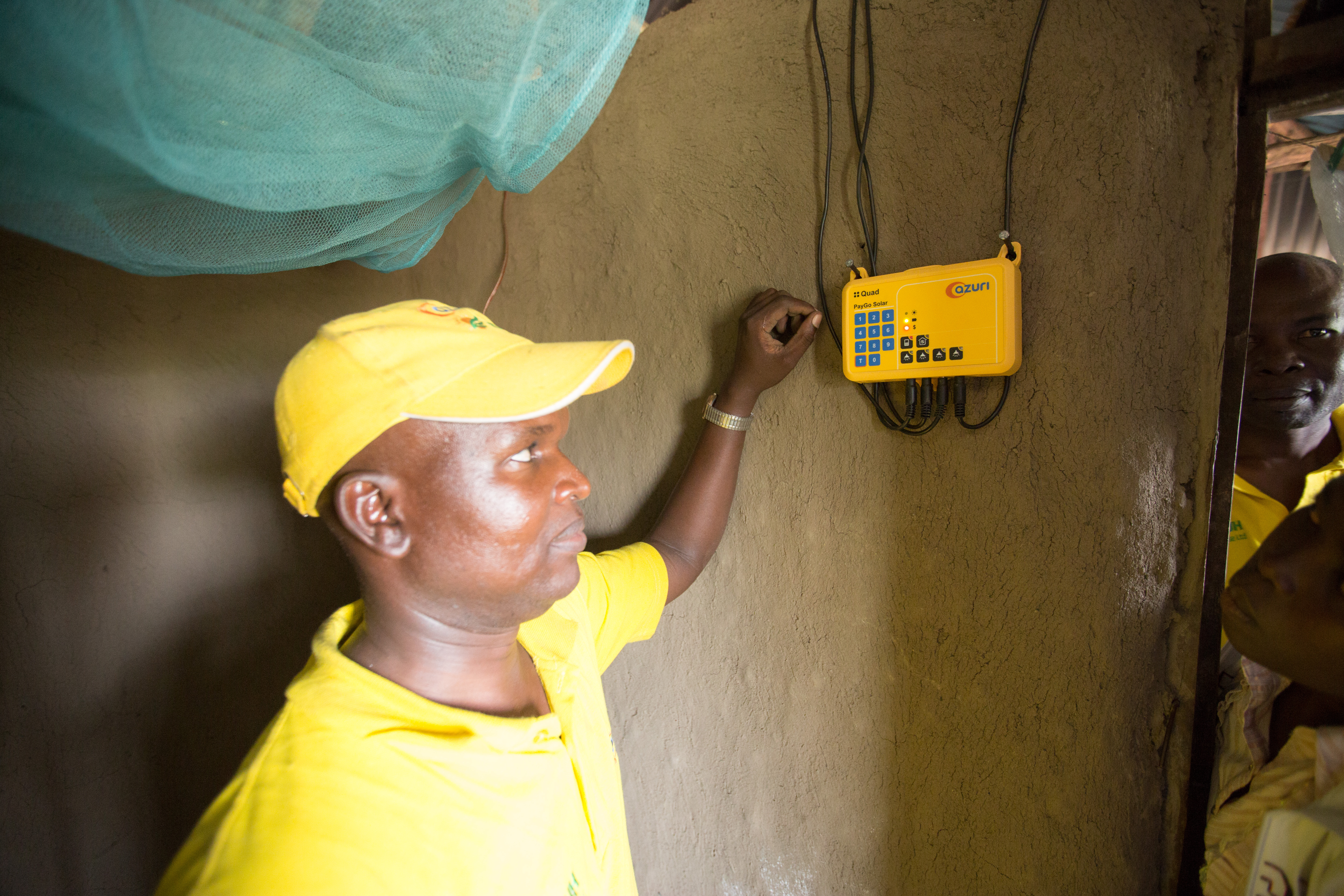 As an entrepreneur in sub-Saharan Africa, Bransfield-Garth and his colleagues at Azuri Technologies have faced their fair share of challenges. As he explains, “Any start-up is difficult, and doing stuff in Africa is difficult. In rural areas, there are few reliable postal services, modern roads, power, sanitation; education is variable; you can’t routinely buy stuff. You have to build quite a lot from scratch. For example, most households don’t have bank accounts. How do you go sell things on credit? But mobile money is more available in Africa. In Kenya, about one-third of GDP goes through mobile payments.”

It is advances like mobile money—created by other entrepreneurs—that allow people in remote areas to access energy through PAYG solar home systems created by Azuri and other companies. He says Azuri was welcomed by rural villagers: “People were tremendously enthusiastic. They were using kerosene lamps. To be able to charge their phones, and not have horrible kerosene smoke is transformational”

In terms of scale, Azuri is right at the early stages: “we reach 50,000 households. Some would say that is scale, but with over 100 million homes without power, we regard the beginnings of scale as one million households.” The barriers to scale thus far have been distribution and financing, particularly infrastructure finance. In spite of these challenges, Bransfield-Garth says they will reach one million households “definitely within the next five years.”

Historically some businesses and organisations have been accused of providing second-rate technology to people in Africa—an accusation that some politicians have made. African markets have at times been flooded with poor-quality or counterfeit solar panels that do not meet standards; this poses immense challenges for consumers. But Bransfield-Garth said there is evidence this is changing. “We’re finding a trend towards completely the opposite – where companies are using the latest technology in order to meet a price point that works in Africa. For example, our solar home systems have the latest LEDs, battery technology similar to that found in Tesla cars, the latest solar panel technology, smart metering, all in a US$50 package in rural households in Africa.” He added, “In my kitchen, for light, I still rely on two pieces of wire and a mechanical switch. The technology we’ve deployed in rural Africa is far ahead of the technology commonly found in houses in the West”.

In his view, mini-grids have a place, for example, to power a business or hospital. However, for dispersed rural communities they are often seen as the worst of both worlds—they have a high cost of connecting up the customer, but without the economies of scale of the grid. “That’s where distributed power comes in”, notes Bransfield-Garth. “Mini-grids work if you put it in and a dozen businesses are right around it, or driving a factory. But they’re not really a grid. They’re a localised power generator, but they’re not distributing power anywhere.” He added, “village-scale mini-grids have so far been singularly unsuccessful. Generally, they fail because the economics don’t work. Many make enough money to cover running costs but not the capital investment”. 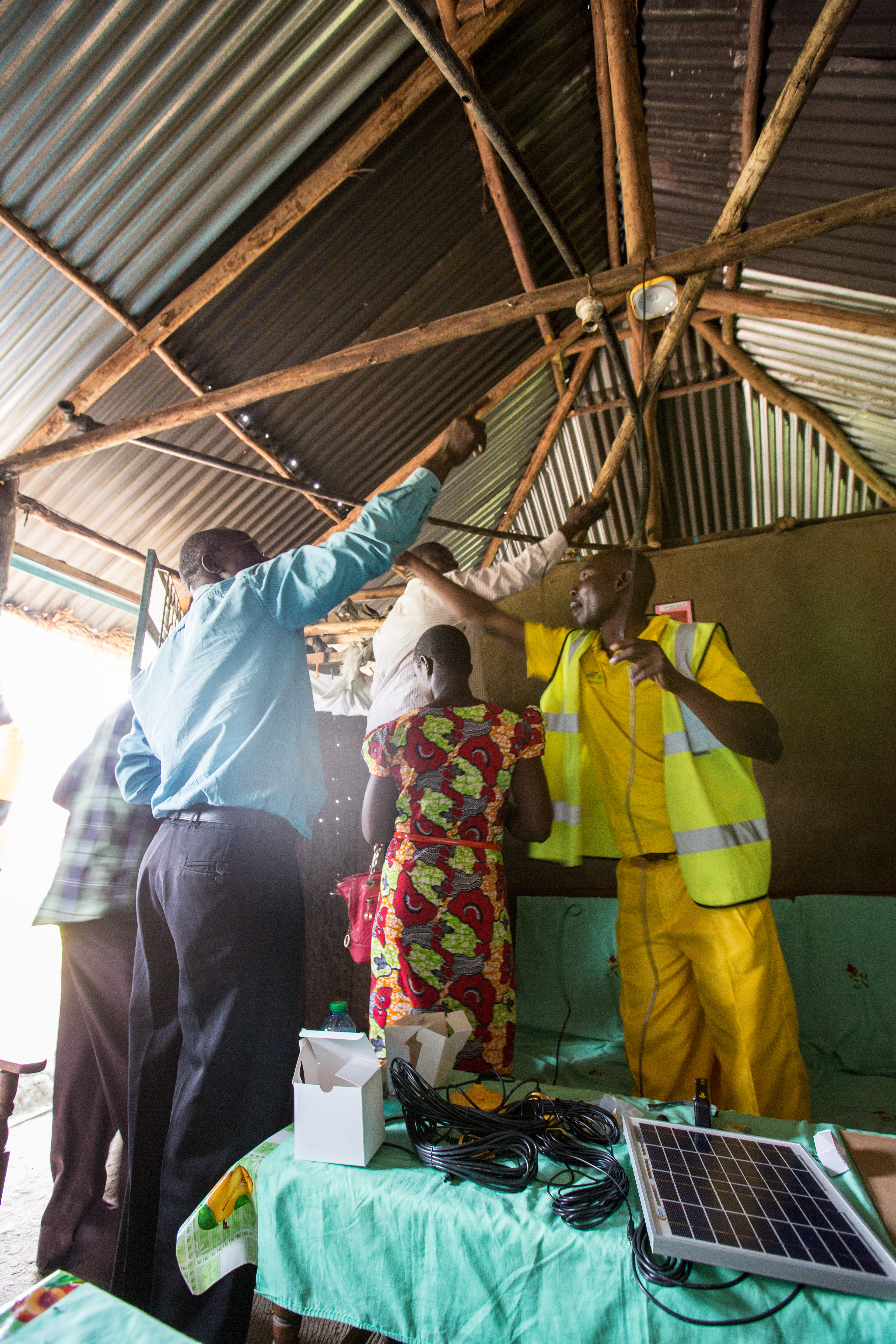 The horizon for Azuri Technologies in sub-Saharan Africa

The vast majority of people who lack access to the grid still do not have access to renewable energy, and there will be no shortage of demand in the foreseeable future. Other companies are also coming onto the market, adding to competition in the sector. “But what we are seeing is the ability to go beyond what there currently is: three years ago, it was one small light in a home. Now we’re seeing mobile phones, smart phones… In 2-3 years, we’ll see TVs, fans, internet access”, said Bransfield-Garth.

One development that may excite many smallholder farmers is a PAYG irrigation product: “we’re talking to smallholder farmers about enabling them to grow three crops instead of one. And at a price they can afford. The irrigation product is expected to cost US$2-3 per week and bring in the equivalent of US$5-10 in revenue. We’re active in 11 countries for PAYG solar, and we are looking to start PAYG irrigation in one and will move it out quickly.”

He advises budding entrepreneurs to “go where nobody else has got to yet”. When thinking about branching out to sub-Saharan Africa, he looked at the mathematics first: there are six hundred million people without access to power. “They’re spending a lot of money on kerosene and mobile charging. It was actually a big market, but at the time few people had figured it out. That really is the nature of being an entrepreneur”, he said.

On risk, he advises “you have to decide what your appetite for risk is”. But his most crucial piece of advice for those going out on their own?: “In hindsight—find someone who has been through the process before. You’re bound to make mistakes. Having someone around definitely helps.”

What is his motivation for being an entrepreneur? According to him, “It’s part of the fun. It’s an opportunity to go do something new, to build businesses, to create something of value that does not exist today”.

Permanent link to this article: https://e4sv.org/interview-simon-bransfield-garth/