Having provided biogas solutions to over 10,000 villages since the mid-80s, Vidya Sagar Devabhaktuni has explored remote areas all over the world. For the president of SKG Sangha, exploring local cultures and understanding the different food habits is essential. For every geographic climate condition in a different country, he has seen a parallel in India. “If you go to Himachal Pradesh you see the Himalayas topped with ice,” he says. “In the north-east, it has the beauty of any European country.” In the north-east, he claims that the people are smaller, and have more of a community approach than in the south. “This happens probably once people are educated, and become independent,” he says. “When I was a boy, our family members used to live together; not nowadays.”

SKG Sangha employs 1200 people, working across 7 Indian states and in 12 countries. Initially, news of the non-profit spread organically, as one village to the next switched on to its biogas solutions. In 1984, when Devabhaktuni started SKG Sangha, he was a newlywed, a graduate accountant from a small village called Challapalli. “It felt like a moral duty to do something in rural areas, for the environment and the climate,” he says. “The first question was, what should I do?” Devabhaktuni had some experience in running various operations as a young student; he had worked in the Unesco club, and the Indo-German friendship society. “The German consulate came to see me when I was 16 years old; it was a contact which helped me plan and implement for later.” 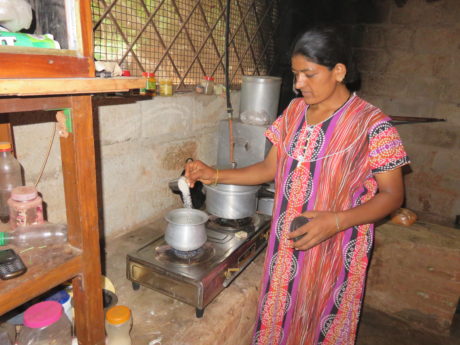 When his mother fell ill, Devabhaktuni, an only child, would take over cooking in the evenings. The experience informed his future philanthropy. “Cooking with firewood and smoke is a very difficult task,” he says. “The rain affected the moisture of the firewood, which would often make the smoke worse.” Of the various alternatives that people use, he says, firewood is the most common, practical, and is free. “We have liquefied petroleum gas as a resource, and can import it from Iran via Pakistan – well, you understand the political situation. 3 litres of kerosene goes to every family, which is insufficient for many days of cooking, is imported and mostly used for lighting. Electricity is more expensive, and is not available to everyone.” Providing clean energy at a cheaper price was the first step, he decided, to eliminate difficulties for those who cooked.

It was a chance contact, with a doctor from the Khaliyan Villages University Commission, who switched Devabhaktuni on to the concept of biogas, which he later went on to take a course in. “We didn’t have internet then,” laughs Devabhaktuni. “It was important to meet people.” Via a governmentally-funded scheme, he was able to do some initial experiments in making biogas units – which led to “100% failure”, he adds. “I was inexperienced! I’m not an engineer. After 200 units, things started to go smoothly. Though it took a lot of time to repair the first 200 units!” The scheme provided enough funds to give salaries to a small team, and getting a legal structure was next.

The two secrets to the NGO’s success is employing local people, and ensuring a maintenance guarantee. Devabhaktuni is also conscious of the environmental quandary that working in biomass can create, and he calls this awareness a “continuous journey”. “Our philosophy for the beginning has been to make the planet inhabitable for future generations,” he says. “My children will also have to live here. For every brick we bake, we lose a quantum of soil for this earth. If we are irresponsible, there would be no building materials or soil for growing food left.” Dung is readily available in animal excreta – but he points out that this produces methane in the degeneration process, which they capture – but which can also produce carbon dioxide, and pollute. 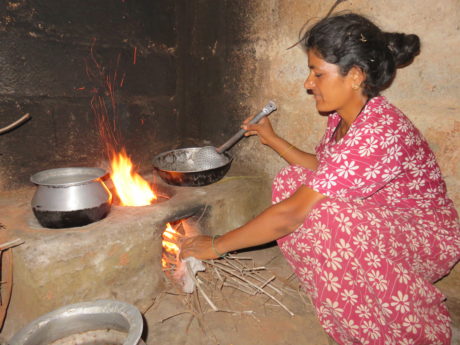 The plan for expansion in the next two months, is to reach 1,000 more villages. “It’s easier to get funding and expand faster since we have become more well-known,” he says. There is a mismatch, adds Devabhaktuni, with Asian and African populations growing and food production coming down. SKG Sangha works in Kenya, Ghana and Senegal too, amongst others. In Mali, the NGO came to provide biogas lamps as well as cooking solutions, because in the majority of cases, they had to deal with the men of the family, who were otherwise not convinced about clean cooking solutions. “I’m glad this marketing strategy worked; the Malians I visited cooked with lard, and in huge quantities!”

“We need an alternative, but there is no investment in agriculture in Africa, for example, for better quality food.” SKG Sangha intends to do this via the high-nutrient sludge coming out of the biogas plant. This fertile, organic procedure benefits the land, added to other organic household waste, creates compost which also acts as fertiliser. This is thus a solution to the lack of investment.

In South America, the company works in Chile, Peru, Honduras and Nicaragua. Devabhaktuni still feels more could be done. “I still feel like our work is just an iota in a big ocean,” says Devabhaktuni. “We are trying to inspire other organisations to take up the job, and provide training for work in other rural areas. Humans are divided by colour, race or language, but the basic arguments for survival remain the same – quality of education, health, and so on. The need is the same in every country.”

Permanent link to this article: https://e4sv.org/interview-vidya-sagar-devabhaktuni-skg-sangha/