On one of Indonesia’s 18,000 islands, Adonara in East Nusa Tenggara, crops such as copra – dried coconut flesh – are sold raw and unprocessed. Copra is usually left strewn on the ground, to dry in the open air. Recent research shows that there is less spoilage when copra is placed into a solar dryer. This is a controlled environment which looks like a giant black box in the field. Inside the “K-dryer”, funded by the organisation Polish Aid, a solar panel powers exhaust fumes which dries the crop out, away from the weather and any other contamination.

This may seem an unsurprising discovery – the power of an innovative machine over centuries-old farming practises. However, this is precisely the vision behind Kopernik, a company based in Bali which devised this container in the summer of 2016. Nearly half of Indonesia’s population – a whopping 250 million people – live in rural areas. Named after Nicolas Copernicus, the 15th century astronomer who discovered the Earth moves around the Sun, Kopernik goes out on a limb for its experimental projects, which are run on a small-scale.

“With the solar dryer, we aim to help farmers in eastern Indonesia increase the value of their products,” explains Sergina Loncle, communications manager, who has studied and worked in women’s empowerment, gender and disability and community-based projects. In another current pitch for a project, the team is planning to help farmers extract honey from the forests in an efficient way, using a filter. “Sometimes, success isn’t always guaranteed – but that’s the nature of experimentation.” Agriculture is a key growth factor in the country’s economy – comprising 15% of GDP in 2014. 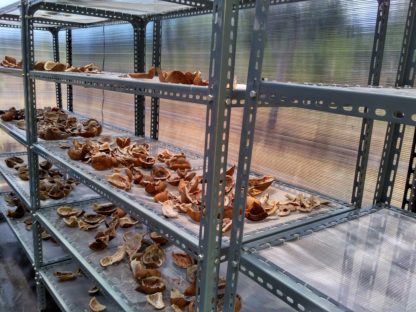 Kopernik was launched by a couple who met when they were UN employees in Jakarta in 2010. Toshi Nakamura, CEO, and Ewa Wojkowska , COO, had relocated to New York when they devised the concept behind their philanthropic and business project, funded by donors. “The challenge is people’s need to access electricity, water and clean energy – especially in the last mile,” says Loncle. “The founders saw that many people living in poverty could not access these basic needs.” Some of these solutions in the last mile are as simple as developing cashew openers. These are, very literally, the toughest nut to crack for workers in Indonesia, the fourth largest country in the world.

A team of 80 employees, headquartered in Ubud, includes a team of three focusing on business development in Japan, where the company is also registered. In total, the organisation comprises four entities – its for-profit consulting arm in Indonesia raises most of the capital for its nonprofit arm, whilst there is also a non-profit arm in the US, which has tax exemption status. 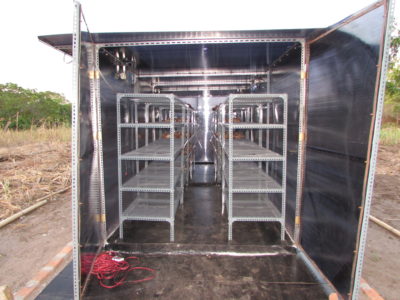 On its website, Kopernik claims to have reached over 400,000 people in at least 26 countries, using over 99,000 different clean technologies. Some of these include solar-powered rice hullers, foot-powered rice threshers or grain storage sacks. Kopernik works in Africa and South East Asia, partnering with local organisations. In Indonesia, Kopernik partners with small business owners, who sell technologies at their grocery stalls. The company focuses on simple technologies, such as solar lights, water filters, or biomass cookstoves – although there are still behavioural challenges here. Loncle explains that cutting the wood into small pieces for biomass stoves can put people off. When it comes to boiling water for use, it takes word-of-mouth for people in rural areas to invest in water filters.

The problem with working in rural areas is the state of the supply chain, says Loncle. “After custom clearance at the airport or the port, we have to wait for the bulk of the products to be brought to us in the east, which can take a month or two,” she says. “From the port to the other districts, in an archipelago country, there are more than a thousand islands. We use multi transportation means from the boat, trucks, even wheelbarrows.

Since late 2014, the company has partnered with Energia on the “Wonder Woman” programme. This extended move into focusing on women agents in the field in the east of the country came after a successful round of funding from Australia Aid. “The programme empowers women to sell clean energy technologies,” says Loncle – their work is useful in areas where the very poor might resist new technologies. “They also receive training sessions on how to do marketing, bookkeeping, maintaining technologies amongst others.” Working with ExxonMobil in 2013, Kopernik helped women created micro-business opportunities in Gugus Barat 1, a local educational district in Northern Aceh. The plan was to aid them in expanding their income generating opportunities beyond primary school teaching; the group successfully launched a flour-mill business.

The focus will remain on women’s empowerment and clean energy technologies. Loncle adds that Kopernik is shifting direction to four new areas – agriculture and fisheries, education, water health and sanitation. The company’s electricity distribution project focuses solely on rural areas. “This new mission is moving from connecting simple technologies, to finding what works to reduce poverty in the last mile.” Should these work, says Loncle, they look forward to the next step – scaling up the solutions.

Permanent link to this article: https://e4sv.org/sergina-loncle-kopernik/